Tom Osborn has a humble manner about him, which is surprising since, at the age of 19, he has already been recognised as one of world’s top young entrepreneurs. 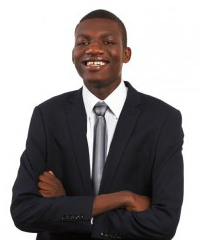 “I think in Africa there are a lot of young entrepreneurs who have great ideas but they never get noticed or past the small-scale level. I think one reason is that they poorly position themselves and the organisation. They don’t know how to tell their story. They don’t know how to create their brand. And I think that is also very important,” says Tom Osborn.

He is the founder of GreenChar in Kenya, a clean energy start-up that produces charcoal briquettes for cooking purposes that are both healthier to use and last longer. His coals are produced from recycled agricultural waste such as sugarcane, which studies show emit 90% less smoke, and have 60% more energy than the normal charcoal used for cooking.

GreenChar is less than two years old, but has already caused a buzz. Osborn has recently been named as one of Forbes‘ global ’30 under 30′ social entrepreneurs, and last year was selected as a 2014 Anzisha Fellow, winning US$10,000 from Donors’ Circle at the Anzisha Prize Gala Awards.

He was also chosen as a global Echoing Green Fellow for 2014, which comes with two years of funding totalling $80,000. He is the youngest recipient to receive the fellowship in the organisation’s 27-year-history.

Osborn’s inspiration behind starting GreenChar was based on a concern for the health of his community, particularly his mom. Growing up in Awendo, a small town in Kenya, he watched how women in the community would cook meals for their families on charcoal-fuelled cookstoves. And as a young child, it was Osborn’s duty to light the cookstove for his mother every day for lunch.

But in high school he discovered something that worried him. “I randomly came across a report  saying smoke from firewood and charcoal killed more people than AIDS, Malaria and TB combined,” he explained.

“That really shocked me and made me start thinking of my mom, and that maybe she was slowly dying from all the times she had cooked for us. And I felt guilty because I was one of the people she was cooking for. So I wanted to try to help her.”

He started researching online and came across students at MIT who were testing the potential of converting agricultural waste into charcoal. Osborn got in touch with them and found out how to produce the healthier charcoal briquettes that GreenChar now offers the market.

It wasn’t just a good idea that led to GreenChar’s success today. Osborn had to think strategically to overcome a number of challenges facing adoption of his company’s product in the market. For starters, he needed to convince consumers to change the way they have always cooked.

“Initially we had to give free samples, because it is a big thing in Kenya that people don’t like to change,” he said.

The free samples allowed him to educate consumers on the benefit of using his eco-friendly charcoal briquettes.

Another strategic decision was to make sure GreenChar’s product could compete with the price of normal charcoal. “For our target customers the biggest factor for them is price. So we believe that even though our product is better quality, it should not be expensive.”

For this reason, Osborn began offering their product at a cheaper price. “And that is why I think we have been very successful so far with sales. Once someone uses it and is able to experience the benefits, and also realises it is cheaper, they come back to buy it again.”

When GreenChar first started it had the capacity to produce 30kgs of its charcoal briquettes a day, but it wasn’t long before Osborn and his team were unable to keep up with demand. Using their revenue from sales, they managed to increase this to 50kgs per day. This soon proved not to be enough either.

However, to increase their production capacity further, he realised they had to hire more staff, and this meant they needed more money. The solution: product diversification.

“At that point we decided to start selling cookstoves to increase our revenue base so that in turn we could scale up the charcoal production,” he recalled.

GreenChar partnered with Envirofit, a global manufacturer of cookstoves that ensured optimum efficiency of his eco-friendly charcoal briquettes. The company started selling these in bundles to groups of women, where the group pays instalments and the women act as security for each other.

The revenue generated from this was enough to allow GreenChar to scale up production to 150kgs a day. But of course even this proved not to be enough.

Using funds Osborn received from Echoing Green last year, GreenChar bought two acres of land and started building its own manufacturing plant. The factory was completed in November and the company produces 2,000kgs of briquettes a day, with the capacity to increase this to 3,000kgs.

The company has also set up a research and development team of university students to design GreenChar’s own cookstoves.

Be well aware of risks

“I think in Africa there are a lot of young entrepreneurs who have great ideas but they never get noticed or past the small-scale level. I think one reason is that they poorly position themselves and the organisation. They don’t know how to tell their story. They don’t know how to create their brand. And I think that is also very important,” said Osborn.

“So I think entrepreneurs should spend a lot of time not only on their products, but also on working out how they are going to sell them.”

Osborn believes solutions to many of Africa’s problems lie in its youth, and advises aspiring entrepreneurs to take the most important step and start. However, he added, they should be aware of the risks.

“In my case I have sacrificed a college education for two years, and if GreenChar doesn’t work I might be screwed up for the rest of my life. And that is very scary,” he noted.