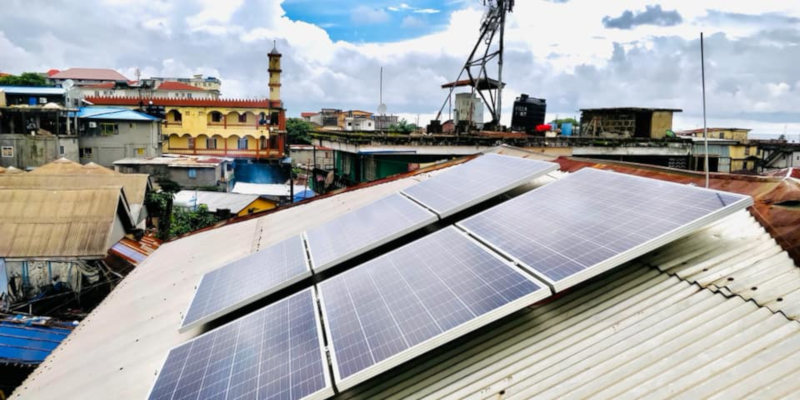 For more than 800 million people around the world, sunset means a world without light.

Now, two social entrepreneurs are brightening the lives of hundreds of thousands of people in one of Africa’s most energy-deprived nations.

“If you drive outside the capital Freetown at night, most people are in the dark,” she says.

Their company, Easy Solar, has supplied 300,000 homes in Sierra Leone with solar-powered lighting and chargers, which can run mobile phones and entertainment devices. This creates 300 new jobs and saves households more than $5 million in electricity costs every year.

The solar solutions are cheaper than the stopgap energy sources people have been forced to use, like shared charging points. Easy Solar says people have been spending between 15% and 20% of their income on energy alone.

“You only realise how much energy is a privilege when you don’t have any,” says Mosia.

Growing up in South Africa, she experienced what was known as “load shedding”, or rolling electricity blackouts, which left her studying for high school exams by candlelight.

“I realised that you cannot talk about wide-scale development on the African continent unless you fix the energy problem. Six hundred million Africans are without power, whereas in the rest of the world we are talking about robotics and AI,” she adds.

“It’s a huge divide and if we don’t fix the foundations of a modern economy, we won’t get it right.”

The company provides a range of products, from small solar lanterns, to home-power systems that supply a handful of houses, up to the biggest systems able to power a TV or cooking stove.

Easy Solar devices are charged on a pay-as-you-go basis, which ensures social inclusion as even the least well-off people can afford one of their services. Mosia says the lanterns alone make a big difference for families allowing children to study in the evenings.

“It’s about having a life where energy is the background,” she says, pointing to the “huge psychological freedom” people gain from not having to worry about where their home energy is coming from.

The company has just begun operations in Liberia and is planning to expand into neighbouring Guinea as it seeks to bring reliable, cost-effective energy to Africa.