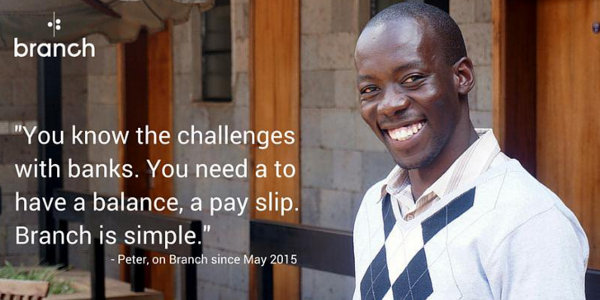 An advertisement for micro-lender Branch.

In Kenya, loan sharks are commonly referred to as “shylocks”. This is in reference to the ruthless moneylender called Shylock featured in the play The Merchant of Venice written by Shakespeare. Specialising in offering quick loans, shylocks have caused financial ruin to many Kenyans, with borrowers often finding themselves paying back several times more than the original amount. These businesses thrived because for many years there were few other options for people who needed cash urgently.

But today mobile phone-based micro-lending is taking off in Kenya, enabling people to access small amounts of money for emergencies while building up their credit history to qualify for bigger loans in the future.

One widely successful platform is M-Shwari, launched in November 2012 by Kenyan mobile network operator Safaricom and the Commercial Bank of Africa (CBA). By March 2015, M-Shwari had deposits of Ksh.153bn (about US$1.5bn). CBA says it processes an average of 50,000 loans per day on M-Shwari. The loans attract a 7.5% monthly interest rate and are repayable within one month.

A number of other companies are offering similar solutions. Nairobi-based financial technology firm MODE initially provided airtime credit to mobile phone subscribers. Today it offers a wider array of micro-credit solutions of up to $100.

One of its products, called Nano, allows mobile subscribers to request salary advances and receive the advance via their mobile money provider. MODE’s users can also secure credit to settle utility bills, which the company pays directly to the utility provider on behalf of the mobile subscriber.

“If you want to pay for your pay-TV and your salary is coming in a week, we will make the payments for you. It is literally leveraging your money to do stuff for you before your money comes,” says Julian Kyula, CEO of MODE. “The world of credit is here to stay, but how credit is done is shifting, and we want to be a major part of that shift.”

The power of small

According to Kyula, small loans are the future of lending. “The last 15 months we have done over $1bn worth of transactions. That is why we believe Nano is the future. This shows small is actually very big – and that is what we have built our business around,” says Kyula.

Shield, a Kenyan start-up, is also offering under-banked employees salary advances directly to their mobile phones. It seeks to solve the problem of high interest rates from shylocks, and the long time it takes to get bank loans approved. Shield promises to advance loans in just five minutes upon approval.

Another micro-lender is Branch International, which has been operating in Kenya for the last seven months. Founded by Matt Flannery, Branch operates like a bank in the cloud, accessible through a user’s smartphone. Users simply download the Branch app, register using their Facebook profile and have access to loans of up to Ksh.50,000 ($490).

Branch users can borrow as little as Ksh.1,000 ($9.80), which Andrew Huelsenbeck, its Kenya country lead, says is essential as a starting point for those who don’t have good credit scores. It currently has 9,000 active borrowers and has disbursed 30,000 loans worth a total of about $1m. An interest fee of an average of 10% is charged over the course of the loan.

“The majority of our borrowers – about 50% to 60% – are micro entrepreneurs and they are using the money to buy stock,” says Huelsenbeck.

Kyula observes that technology-based solutions are an answer to the inefficiencies of traditional banking. Huelsenbeck concurs, saying the long time it takes for bank loans to be approved makes mobile lending attractive.

“You have a generation coming up that is not going to queue in banks,” notes Kyula. “Banking is the one industry that hasn’t changed much since 1800s but something is about to happen. In the financial services spaces, technology is taking over. There are still banks today in the world where you have to be introduced by one of the bank members. Some people are about to be totally out-innovated. It is just a matter of time.”

Kyula hopes to reach out to those ignored by traditional banks. He sees a rural farmer with a mobile phone as a potential client. Kyula says the company does proper credit assessments using smart algorithms.

“If someone has registered with a utility company – whether it is from a traditional utility or a pay-as-you-go solar company – that is credit history. To me such a person is bankable. The question becomes what is a bank? At MODE we are specialising in turning your SIM card into a financial institution. We are not careless. And remember we have so much volume that it makes it possible for us to take a lot more risk,” he says.

However, this increasing access to instant loans has come with an ugly side. In January 2014 – just 14 months after it launched – 140,000 users of the M-Shwari service were blacklisted for defaulting on loan payments. Their names were forwarded to credit bureaus potentially locking them out from accessing loans for several years.

Kyula and Huelsenbeck agree that most people do not understand the consequences of having a bad credit score.

“We have seen excellent results in repayments. Our default rate is low – about 5%,” says Huelsenbeck. “However, I don’t think people in Kenya are familiar yet with the consequences of what it means to be listed with the credit reference bureaus.

“A lot of people I think didn’t realise what they were getting into. We have been doing our best to educate our customers before they default, before they get blacklisted. But when they have, it has been a very inconvenient experience for the ones that got listed.”