In almost every corner of Nairobi one seems to come across a pharmacy. And Kenyan entrepreneur Chris Getonga notes that dozens of outlets open every year, adding it is “an easy business to start if you are a pharmacist”. 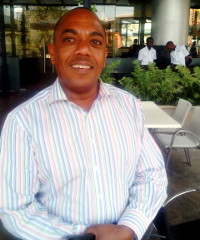 Getonga is not a pharmacist, but over the last decade has built a successful retail chain in Kenya. Mimosa Pharmacy operates six stores in upscale shopping malls targeting upper-middle class Kenyans and expatriates.

“In 2013 we had four different PE funds chasing me very aggressively. I never went out to anyone looking for money. We already had seven locations (including at Westgate mall before the terror attack) and had signed 10 more locations in upcoming shopping malls. So investors felt Mimosa was a good fit into their ambitions to penetrate this market.”

Getonga tells How we made it in Africa that investors pursuing Mimosa were keen to venture into the fast-moving consumer goods market in East Africa. He explains that in the pharmacy business, 50% of sales come from non-pharmaceutical and personal care products. This part of the business is much more lucrative compared with tablets and medicines where prices may be government regulated.

“It is non-pharmaceutical products like skin creams, lotions, perfumes and non-prescription items like cough syrups. The margins there are quite good. It is a cash business, and everything is about economies of scale.”

Although Mimosa is not the biggest pharmaceutical chain in Kenya, Getonga says several factors played a role in attracting investors. “We are located in high-end malls. This was a deliberate and strategic move to target upper-middle class Kenyans and expatriates. A large part of our client base does not ask for discounts.

“The other reason investors were interested is because Mimosa was 100% owned by me. So they knew they’d be dealing with one person and the decision-making process would be shorter. And we also had audited accounts for all the years we have been in business.”

Getonga adds that the people culture which enabled the business to attract and retain talent worked to its advantage in the investment round. Mimosa’s staff turn-over is negligible.

“I created a good environment for them to work in. We were paying staff well and I was not bothering them. The retail business is all about people. If you are going to grow in multiple locations the only way to succeed at it is empower your staff, because you can’t be everywhere.”

It has been a long, 25-year journey for Getonga in the medicine business, with many ups and downs. Growing up he majored in sciences and wanted to become a doctor but his mother would hear none of it. She was a nurse and warned him about the long hours doctors work, limiting their social lives.

So he studied for a maths degree. And when he finished his postgraduate studies in London, returned to Kenya and joined his mother in running the family pharmacy.

Later he started a high-end laboratory in the CBD of Nairobi, but the location worked against him. Patients faced difficulties getting to the laboratory due to limited parking spaces and traffic congestion.

“The location was chaotic and as a result we were losing quite a bit of business. So we looked for bigger space outside the CBD and started a chronic illness centre dealing with people with HIV/Aids, renal problems and cardiac illnesses.

“I was inspired by the experience my family went through when my father passed away about 28 years ago. At the time people did not know what was wrong, so he was in and out of hospital for five months. We later found out it was lupus.

“Things were very expensive and my mother even had to sell the house to pay the medical bills. So when I started a chronic illness centre I wanted to offer such patients more affordable services.”

Getonga then started a company that offered pharmacy, X-ray, laboratory and doctors’ services. The business grew rapidly at a rate of 30% to 35% annually. It mostly served corporates and relied on payments from insurance firms.

“But as the company grew we found that insurance companies would look for any reason to either slow down payment or not pay at all. In those days the systems were not digitised and linked as they are today, so we wouldn’t even know if someone’s cover had expired or if they were not covered for a particular element.”

The biggest blow came when violence broke out in Kenya in 2008 after disputed presidential elections. “Everything stopped. Insurance companies were not paying at all, and bills were mounting.”

He sold the business to a group of doctors and he was left running a “small-scale pharmacy”. He changed its name to Mimosa and managed to turn it around. In a span of a few years the business had five branches and was collecting sales of over Ksh.1m (about $11,200) a day.

The growth was made possible by the fact that there were now “systems in place that could not be manipulated”, he had a friendly bank, and his staff were fully empowered to run the show.

When it’s time to let go

Following the investment by Catalyst Principal Partners and ACBC, Getonga stepped aside as CEO of Mimosa although he still holds a stake in the business and sits on the board.

Drawing from his experience, Getonga says entrepreneurs need to know when “it’s time to let go”.

“I have always wanted Mimosa to be big. There is a pharmacy chain in New York called Duane Reade with over 250 locations. When I first saw it I told myself I was going to build the Duane Reade of Kenya.

“All these investors had similar goals, and looking at how aggressive they were I knew they would come to Kenya, with or without me.”

Getonga says the investment process he went through “was very involving” requiring due diligence and the input of lots of professionals which can be expensive.

“I know there are a lot of SMEs who are in the same situation I was, where on the surface everything looks good but they really need that $1m or $2m deal to get them to the next level.

“On the other hand there are a lot of investors looking for deals in Kenya. So I am starting a business to help people through some of these processes.”