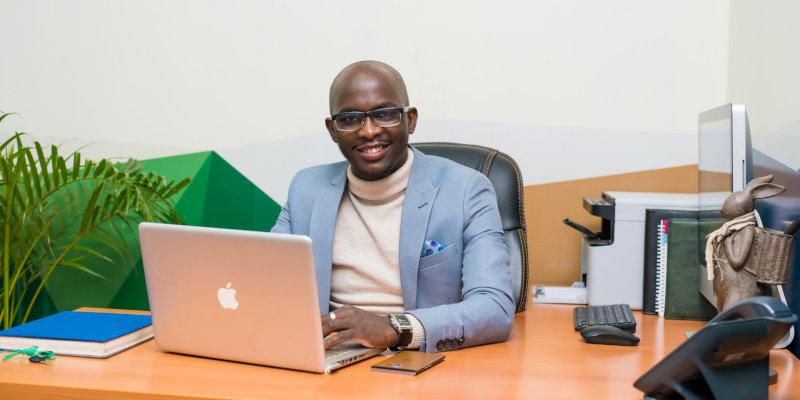 If you had the option to choose between money, connections or the ability to endure the lows you’ll encounter while working to become successful in business, what would you choose? All the above sounds about right, right? But oftentimes, few of us are ever so lucky to chart our course toward success with everything working in our favour.

Such has been the case for Duncan Njue Mutwiri. His journey to becoming a young CEO has been marked by equal parts failure and success. So how did he beat the odds to become the founder of two successful digital media and technology companies – Growthpad Digital Consulting and Zidi Africa?

“I stayed on and remained aggressive while most of the people I partnered with quit on me right when things started to get interesting.”

It’s this sense of stamina and determination to push past failure that Duncan attributes his success to as he looks back at how every challenge he faced mentored him to become the man he is today.

Since his days back at Maseno University, Duncan has always been quite the visionary. During his second year, he was selected to become the first Google student ambassador on his campus. In addition to all the perks the Google opportunity came with, Duncan also learned how to work with different teams and implement Google for Education applications within Maseno, a first for any university in Kenya. And just like that, Duncan’s passion for digital media, technology and their impact on business was ignited.

A year after, bringing together all the skills he learned, Duncan began Youth Hub to help students learn how to start and manage businesses. Together with a few friends, they organised two career fairs helping high school leavers make career choices based on their strengths and interests. The group expanded their vision for the event and began organising entrepreneurial summits bringing together various business leaders to offer sage business advice to entrepreneurs.

With the success of Youth Hub behind him, everything seemed to be on the up and up for Duncan, so in 2016, he decided to move to Nairobi. With only a bag of clothes and 12,000 shillings saved from campus, the only place he could afford to move into was a student hostel. They offered him a bed, a mattress, lunch and supper which afforded him necessary comforts while he and a two friends worked on a software company startup.

Due to the struggle that comes with acquiring clients, the software business accrued debt, made losses and eventually failed terribly. His partners went on into employment but Duncan kept his dream of having a successful business alive.

With no partners in 2017, Duncan started Growthpad Digital Consulting focusing on offering digital media and technology solutions to companies and conducting digital media trainings for marketing teams and business executives. This he did because he realised that most companies hire marketing agencies but never reach their goals because they don’t understand digital media. His aim was for Growthpad to help marketing teams ask meaningful questions when their money is not spent well by the agencies they hire and for business executives and C-level management to understand changes in digital media and how to determine advertising spends and digital media return on investment.

He almost gave up that same year (2017) when a client called him for a meeting on Mombasa Road. At the time, he was living in Kinoo and only had enough bus fare to get to the client’s office so he was relying on a successful meeting that would yield business so he could also have money to be able to return home. As luck would have it, the client did not give him any business. Only promises. And the only hope he had was to ask a stranger at the stage to pay for his fare to get back to town. Thankfully, he did and Duncan was able to get to town just as it had started to rain.

Unfortunately, to get back to Kinoo, he’d have to rely on someone else’s kindness as he was still short on cash for bus fare. Through some miracle of intervention, Duncan’s cousin was able to give him fare to get home.

“That day was the most frustrating day of my life. I’m in town. It’s 4pm and it’s starting to rain. I don’t have fare. I don’t have anywhere to stand so I don’t get wet. I don’t have a paying client. It was hard. I was going through a lot of phases of self doubt. You’re looking like you made a mistake and you’re seeing your peers, guys who you were with in school, doing well in their jobs because they took the employment route and you wonder, “Why am I doing this to myself? You have the skills. You have the knowledge. You can get a job. Why are you torturing yourself? The entrepreneur path you’ve chosen is harder, longer, and stressful.”

A year into the struggle in stabilising the business, Duncan made his first million and he says everything he went through to get to that point was worth it.

It took a while for companies to partner with him because at the time, Growthpad was a startup with only one employee. But Duncan remained aggressive in looking for market and pitching his company until Growthpad acquired clients in the electronics and e-commerce sector. The company later expanded to 12 employees and growing to serve their ever-expanding client base in the hotel industry, banking and pharmaceutical industries.

Duncan has been able to expand his networks by attending open business chamber events (that have even helped him land clients he would never have met otherwise) and has received business advice from CEOs and high ranking executives in Kenya. His advice to entrepreneurs is to prioritise hiring people that are smarter than you and to not be afraid of failure. For the 27-year-old entrepreneur, with five failed businesses out of seven started, Duncan feels like he’s just getting started.

“My vision is to turn Growthpad Digital Consulting and Zidi Africa into internationally competitive companies that are able to partner with globally renowned companies and have recognition on a global front. I also want to build a place where people look forward to going to work.”