While the evolution of mobile banking solutions has meant that more and more Africans are being financially included, a large percentage of the population is still unbanked. Some economies remain largely cash based societies. 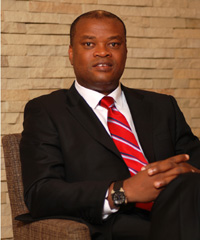 “The gap is closing but not as quickly as everyone wants it to be,” said Daniel Monehin, division president for sub-Saharan Africa at MasterCard, in an interview with How we made it in Africa.

Other than the implications that it has on reducing poverty, increasing the number of Africans who are financially included holds big business potential for MasterCard over the long term.

“The benefit of financial inclusion far outweighs revenues for MasterCard,” argued Monehin. “We are looking at formalisation of trade, for example… when [trade] happens in cash, there is no record of it and therefore small businesses owners are not able to grow as quickly as they can. They are not able to access loans from banks because the bank cannot see their transactions; they can’t track it.”

According to Monehin, Africa is a strong market for MasterCard and the multinational corporation has identified a number of African cities based on their potential for growth. The MasterCard African Cities Growth Index was developed towards the end of 2012 and analysed 19 cities across sub-Saharan Africa, ranking them according to their growth potential between 2012 and 2017.

The capitals Accra (Ghana), Lusaka (Zambia), Luanda (Angola) have been identified as the sub-Saharan African cities with the highest potential for growth over the five years. They were followed by Dar es Salaam (Tanzania), Addis Ababa (Ethiopia), and Nairobi (Kenya).

“We see Kenya as a very strong market in terms of positioning as a hub in East Africa… Angola, having got past a civil war for several years now, is showing very strong growth in terms of GDP… and FDI as well. So all the indicators are very strong in that market,” added Monehin.

Despite Nigeria’s Lagos and Abuja only making MasterCard’s city rankings in 13th and 14th places respectively, the country remains a key market for MasterCard’s business focus. For example, the National Identity Smart Card recently deployed in Nigeria is powered and branded by MasterCard. These new identity smart cards fall under the National Identity Management System (NIMS), established to foster the development of a universally accepted identity management infrastructure in the country, and has electronic payment capabilities. The multipurpose identity card has 13 applications including MasterCard’s prepaid payment technology. This aims to encourage online, cashless transactions, and the pilot is seeing 13 million cards being issued to those 16 years and older.

In addition, MasterCard has partnered with non-bank financial institutions, like Nakumatt, one of the largest supermarket chains in East Africa. The partnership converted the Nakumatt Cybercash loyalty card to the Nakumatt Global MasterCard Prepaid card, allowing customers to load money onto the card for purchases at point of sales terminals, cash withdrawals and online purchases at Nakumatt stores across East Africa, and at any retailer that accepts MasterCard payment cards worldwide.

“[Nakumatt customers] will now have a MasterCard prepaid card which is like an entry level solution for people who are coming into financial services for the very first time. But it’s a very powerful solution because it can be used globally, not just in Kenya or in Tanzania where it is to be rolled out but everywhere in the world. And it delivers power to Nakumatt customers and opens up financial services to them without the customers going to the banks to get this done,” explained Monehin. “So we are reaching the citizens through various channels.”

Drawing from his knowledge of doing business in Africa, Monehin said that multinational companies do not always have to develop unique solutions for Africa, but rather these solutions have to be delivered in a manner than is market relevant to African economies. “You need to have a market relevant approach… we have developed global standards, and are making them locally relevant.”

He added that having a strong local presence is critical too, as Africans want to have a close relationship with the companies they do business with, and there should be an emphasis on hiring local talent.

In addition, concluded Monehin, companies should look to enter African markets as early as possible. “Africa is on the move, and those that have the first mover advantage will definitely have a leg up.”