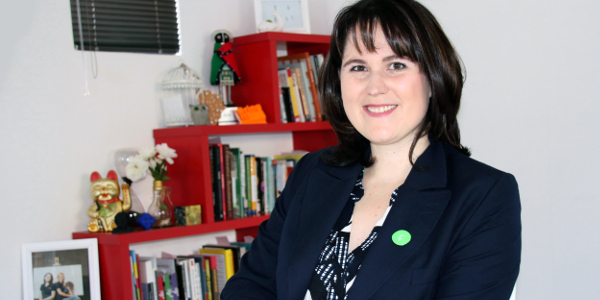 Artist-turned-entrepreneur Lindy Scott, on how to utilise creativity in strategy.

The belief that non-creatives can indeed be creative when you offer them a framework where there is playfulness and the freedom to make mistakes, led to the birth of Conceptual Eyes in 2012. This creative agency assists blue chip companies to communicate their strategies and innovation plans internally.

Lindy Scott started at team-building company Dream Team Catalysts shortly after obtaining her BA Fine Arts degree at the University of Witwatersrand, South Africa, in 2010. Thereafter she did an internship with its partner company, Hercules Trophy, in Europe. These two companies encapsulated everything that she lived and breathed – collaboration, team-building and creativity. The entrepreneur was born.

A year later, at the mere age of 25, Scott was back in South Africa – with a business plan. She met up with a former Dream Team Catalysts colleague, Kay Inkster, describing it as having been “a powerful meeting of minds”. In 2012 Inkster became her business partner and Conceptual Eyes’ angel investor.

They started the business in the loft of Scott’s parents’ home. When clients asked to see them they would make excuses, saying they were traveling and would come and see them. “I could hardly tell them I was operating out of a loft, and not even the loft of my own house, but of my parents’ house… It was humble beginnings,” she says.

Conceptual Eyes now operates from offices in Edenvale, Johannesburg, in South Africa. It has its own workshop, and the company has partnered with a large consultancy firm.

How did the business grow into the company it is today?

In the past year, Conceptual Eyes has experienced 400% growth in revenue. The skills set between the original team of Scott (the artist), Inkster (team building, training and development) and their UK investor and business mentor Kevin Gaskell, sets them apart.

Thinking back, Scott believes having brought in shareholders and business partners from the start was the best decision she had made. She says many entrepreneurs believe they must do it all themselves. “From day one I had support and I had people backing me,” she recalls.

“We do not sell team building, but we assist clients to communicate to their workforce by using specific methodologies. That has given us quite an advantage in the market.”

Conceptual Eyes has worked with large listed companies in the financial, mining and construction sectors and currently have a core team of four employees, with around ten part-time staff members. Recently the Health and Safety Dialogue Company Ltd. was launched as a spin-off company that will focus on the mining and construction industries, bringing health and safety policies to life through workshops and visual campaigns. Scott says the team sees Health and Safety Dialogue Company as a “new wave” of revenue.

Surely it can’t be that easy. She must have faced challenges?

Scott says their phenomenal growth has brought some new challenges, of which finding the right talent is currently the biggest. The company needs people who can sell fun to the client, but who are still able to deliver it through analytical thinking.  People who can see the big picture without losing sight of important smaller detail and who understand the complexities of the industries they work with.

The work is constantly changing and since Scott believes in a lean model, it is quite a challenge to have the right mix of “creators and strategists” on team.

Because she was only 25 years old when she started her business, Scott remembers that she started doubting herself, mainly because she had too many people involved in every little decision she made. Coming from an artistic background, she understood things like marketing and strategy, but she lacked financial knowledge for the entrepreneurial environment.

A business model is a great “to have”, but if you do not understand how to manage your cash flow, things can go seriously wrong, she warns.

Scott believes an entrepreneur must be completely focused and has to believe in what he or she sets out to achieve. An entrepreneur needs to be able to learn, and for her this is not about academic achievements, but about learning from your mistakes and constantly looking for ways to improve yourself. “You have to be brave.”

Asked whether she has mastered all three of these crucial skills, she hesitates and then says: “They are all work in progress.”