A lot has recently been written about Africa’s expanding middle class. While there has been debate about how to define the continent’s middle class, there is no doubt that this group is growing. 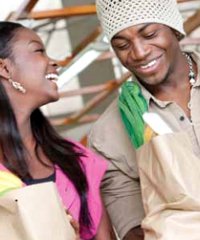 The African middle class is mostly concentrated in urban areas.

There have been suggestions that the African middle class should be defined as those with spending power of between US$2 and $20 a day. Some have, however, argued that $2 is too low. In 2010, according to the African Development Bank (AfDB), Africa’s middle class, defined as those with a daily expenditure of between $4 and $20 a day, stood at just over 120 million, or 13.4% of the population. The AfDB said that if remittances from Africans living abroad – which usually go to households with per capita income levels of less than $4 per day – are taken into account, a sizeable segment of the poor group is likely to move into the lower middle class category of $4 per day, thus making the estimate of 300 million for Africa’s middle class population more plausible.

Who is the African middle class?

In a recent report professional services firm Deloitte notes that most of the African middle class live in urban areas, and do not generate income from farming or other rural activities.

Africa’s middle class generally has fewer children than previous generations and certainly less than people living in rural areas. Many aim to send their children to overseas universities.

Opportunities to tap into the middle class

But what opportunities does Africa’s growing middle class create for business?

“The biggest implication of this emerging African middle class is for consumer goods and services, such as consumer business/retail (both food and clothing); technology, mobile and telecommunications (TMT); entertainment; financial services; and healthcare, but also with a spill-over effect into other areas such as construction, infrastructure development and agriculture,” says Deloitte.

The report explains that there are huge first-mover advantages for companies targeting the middle class, and that seizing these opportunities call for leadership with a clear and long-term vision.

However, despite the fact that the continent’s middle class is growing, it is vital to remember that 61% of Africans still live on less than $2 a day. “Clearly, for those companies seeking to expand their footprint on the African continent, opportunities lie at the bottom of the pyramid and this implies doing things differently,” says the report.

Deloitte’s advice to financial institutions in Africa is to package and formalise informal savings schemes as well as to offer unsecured lending. There are also opportunities to develop mortgage products.

Banks should view African women as a distinct banking segment with specific needs. “Women represent a significant untapped market which can be serviced profitably – both as individuals but also the segment of women entrepreneurs. An attempt to quantify the funding gap experienced by women-led businesses that lack adequate access to finance was undertaken recently by the G20. The conclusion was that a shortage of funding of the order of $20 billion was needed to bridge the SME funding gap. The resilience of African women combined with statistics that women pay back loans on time represents an opportunity that the banks have not capitalised on,” notes the report.

Companies operating in the consumer goods space should repackage products into smaller units to suit local affordability. Food manufacturers must adapt products for local tastes. There are also opportunities for auto manufacturers to partner with a local bank and offer vehicle financing.

According to the Deloitte, Africa’s middle class present potential for property developers, especially in the construction of shopping malls. “To illustrate the size of this opportunity, for example, Nigeria has a population of 160 million people and has 36 states each with a sizeable population and requiring formal retail infrastructure.” In addition there is a demand for modern, but affordable housing.