This year the world has received conflicting media reports concerning Nigeria’s business environment and there is a need for foreign investors to understand both the risks and rewards. 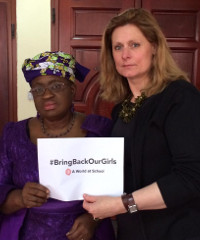 Sarah Brown, wife of former British Prime Minister, and Ngozi Okonjo-Iweala, Nigeria’s Minister of Finance, at the World Economic Forum on Africa this month. #BringBackOurGirls (referring to the over 200 schoolgirls kidnapped in Nigeria) has been trending on Twitter and the online space globally.

On the one hand, Nigeria was officially recognised as the largest economy in Africa when the country’s GDP base year – the benchmark year for all calculations used in working out the GDP of a country – was changed from 1990 to 2010 in April. As a result, the country’s GDP was recalculated upwards by close to 90%, officially taking over South Africa as the number one economy in Africa.

This came just before Nigeria hosted the World Economic Forum (WEF) on Africa, cementing its prominent position on the continent. The event brought together global business and political leaders to discuss the future of investment and sustainable development in Africa, under the theme, Forging Inclusive Growth, Creating Jobs. All eyes were turned on Nigeria.

But the month of April didn’t just bring international attention to Nigeria’s new status in Africa. The world was horrified over reports of the kidnapping of more than 200 schoolgirls in northern Nigeria by Islamic terrorist group Boko Haram. Abubakar Shekau, its leader, released a video claiming responsibility for the kidnapping and threatening to sell the young women. The threat terrorism poses in Nigeria was also brought to the forefront of discussions at the WEF on Africa this month.

Boko Haram – whose name roughly translates as ‘western education is a sin’ – has been increasing its attacks on civilians and institutions in recent years, most notably in northern Nigeria.

In light of today marking 15 years of democracy in the West African country, President Goodluck Ebele Jonathan addressed the nation this morning, saying: “It is a sad fact that as I address you today, all the gains of the past 15 years of democratic governance in our country are threatened by the presence of international terrorism on our shores. Our dear country, Nigeria is facing a new challenge. A war has been unleashed on us.”

Messages of Nigeria’s huge investment and consumer potential, mixed with reports of terrorism and bomb blasts as close to business and administrative centres as the capital city Abuja, can give foreign investors and companies a conflicting view of Nigeria’s business environment.

Obinnia Abajue, executive director for personal and business banking at Stanbic IBTC, told How we made it in Africa that foreigners need a “full and balanced view” when coming to Nigeria to do business. On the one hand, there are challenges and security risks, but on the other there are very real opportunities, he noted.

“In the mist of every chaos lies the opportunity. I suppose that if everything was okay and a bed of roses, the whole world would be on the plane coming here… You will find that those who are able to see the opportunity – and focus on that despite the [risk] and destruction – are those that will be able to get a foothold in and they can benefit as the market continues to grow.”

He added that the country’s consumer base and demand offers considerable potential for foreign businesses, and there is a global vested interest to support the country in its development.

“And the truth is, from an economic perspective, the fact that we have had all these terrible things happen has not changed the fact that the economy is strong… For foreigners coming in, just come in with your eyes wide open, on the account that there are challenges in the midst of the opportunities.”