Swahili is spoken by more than 60 million people across the entire eastern section of the African continent. It has official status in Kenya and Tanzania.

“It is a very significant language for us in terms of the volumes of translation required by clients,” says Philip Zietsman, MD of the Folio Group translation consultancy. “Quite simply, if you want to tap into the thriving market of east Africa, your marketing material and packaging has to be translated into Swahili.” During the last decade or so, Folio has seen a steady increase in the demand for the language.

Although the number of people who speak Swahili as a first language is relatively limited, it is the lingua franca of the whole of east Africa. Many, many people speak it as a second language because it has emerged over time as the language of trade, science and technology. Swahili transcends political borders and tribal affiliations throughout the region.

Other regions where the language is widely understood include certain parts of Somalia, Burundi, Rwanda, Mozambique and the eastern provinces of the Democratic Republic of Congo.

Swahili is one of the most dynamic of African languages and is evolving rapidly to meet the needs of the modern era. Thanks to initiatives such as the web-based Kamusi Project (www.kamusi.org) which involves hundreds of participants and editors and supports the Internet Living Swahili Dictionary, as well as an oversight body named Bakita, based in Tanzania, the language is being standardised. 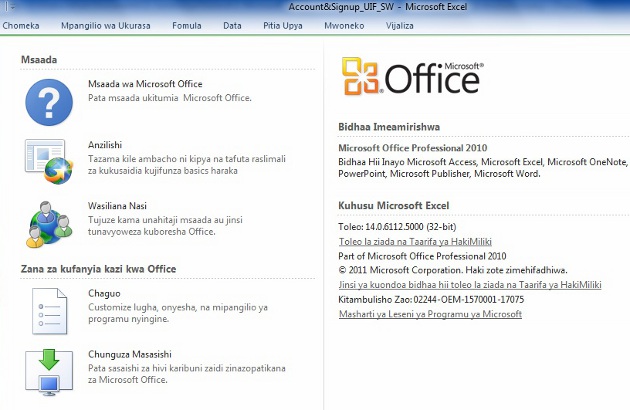 Many new words are coming into use, particularly in the fields of science, technology, politics, psychology, medicine and economics. Some new terms come from English and Arabic and all new words and phrases are vetted and incorporated into the vocabularies of the various disciplines to ensure that, ultimately, they can be understood by as many people as possible.

These days online resources are available to translate text instantly. For example, Google Translate offers Swahili as one of its language options. Does this render the services of translation agencies such as Folio outdated and unnecessary?

Folio’s professional translators are required to be qualified at tertiary level and all are mother-tongue speakers of the languages they specialise in. Where Swahili is concerned, because the users are spread across such a vast geographical area, regional differences are an important consideration in the translation business.

Says Zietsman, “Written Swahili is fairly standard across all the countries where it is used, but the spoken forms differ quite considerably. For example, our top Swahili translator, who is based in Kenya, uses the pure form of Swahili, that has its roots in Zanzibar, for his translations. However, if we were to source a translator from the eastern DRC, for example, there might be a risk of the regional dialect contaminating the translation, rendering it difficult to understand by people outside of that area.”

Johan Botha, Director for International Clients at Folio Online, says that much of the demand for Swahili comes from companies in the telecoms, IT and pharmaceutical industries.

Kenya is a world leader in mobile banking, and the leading brand name in the field is M-Pesa. ‘Pesa’ means ‘money’ in Swahili, and needless to say, the cellphone banking instructions and prompts are available in Swahili.

Another example of how a language has evolved to meet the needs of 21st century applications is that of medical devices. Says Botha, “Devices are now available in Africa that inform patients, either by voice messages or SMS that it is time to take their medicine, or in the case of diabetes, to take their insulin shots. Naturally, these messages must be translated into the appropriate languages.”