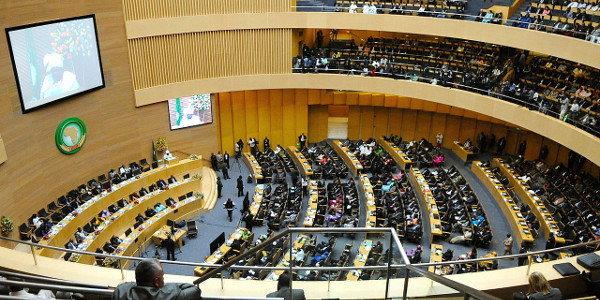 This article was written specifically for the NTU-SBF Centre for African Studies, a trilateral platform for government, business and academia to promote knowledge and expertise on Africa, established by Nanyang Technological University and the Singapore Business Federation. It is part of a series on economic integration in Africa, done for the centre.

After long negotiations for the Continental Free Trade Area (CFTA), which aims to connect 1.2 billion citizens and increase trade by up to US$35bn, Nigeria pulled out at the last minute before the signing in March 2018. Forty-four African countries went ahead, but one of Africa’s biggest economies and its largest by population stayed out. Nigerian President Muhammadu Buhari cited resistance from his private sector and a need for more consultation, despite the Nigerian cabinet already having approved it. Labour representatives were particularly unhappy as they felt important economic decisions had been made without enough consultation.

This highlights a perennial challenge that regional projects in Africa face, namely generating buy-in from the private sector from the onset to bolster the commitment of member states. The private sector is vital for the continent. The engines of growth are businesses, especially small and medium enterprises (SMEs). The private sector accounts for 90% of employment in Africa. Moreover, the Brookings Institution says SMEs may constitute as much as 95% of lower income countries’ enterprises and some 50% of the workforce work for companies with less than 100 employees. It seems surprising, given the increasing engagement that regional institutions have promoted, that major business communities still feel left out, and worrying when they prove to be late deal-breakers in the absence of deeper engagement.

Regional organisations (ROs) in Africa, such as the African Union (AU) and its regional economic communities (RECs), should be critical partners helping businesses address continent-wide problems that constrain growth. Simultaneously, ROs need broader support to develop policies and push for implementation at the national level. Indeed, transnational businesses would greatly benefit regional negotiations because they have daily experiences of the barriers to cross-border trade.

In 2013, the African Development Bank (AfDB) recognised the weakness of its engagement with the private sector and placed it at the core of its strategy, but Africa’s ROs have been slower to move on this front. In its 2017 Status of Integration report, the AU noted that ongoing challenges, such as the lack of harmonisation of policies and inadequate implementation “could be explained by the top-down approach used in developing the various regional and continental policies and programmes with poor involvement of the private sector and civil society organisations”.

There is an opportunity for mutual benefit, but the RO-business nexus needs significant strengthening. Currently, the most important headway is the increasing participation of the private sector in regional infrastructure projects through the Continental Business Network (CBN) and the Programme for Infrastructure Development in Africa (PIDA). Infrastructure projects, which have massive financing requirements, have inevitably been drawn to private sector engagement out of necessity. But policy areas have still lagged behind, and this can be improved by looking at some of the positive examples from the continent.

The East African Business Council (EABC), the representative voice of business at the East African Community (EAC), provides an example of an effective RO-business relationship. It includes a membership of 54 business associations and 108 individual businesses, including both multinationals and SMEs – its membership is open to any private sector firm. While it only has observer status in the EAC, the EABC participates in the organisation’s summits and has its own annual meetings attended by heads of state and high-level EAC officials. Its successes in advocacy and regional policymaking are plentiful: Following pre-budget consultations at the EAC Secretariat in 2016 and 2017, 42 out of 46 of the EABC’s tax proposals were adopted by ministries of finance as part of their national budgets. Unfortunately, the success of the EABC in effectively influencing regional policy through a consistent channel is an exception rather than a rule. Elsewhere, the voice of business is clearly lacking.

While the AU has an Economic and Social Council and a Civil Society and Diaspora Division, both are geared towards NGOs rather than businesses. Furthermore, membership is restricted according to geography and size, rather than being an open process as with the EABC. Some departments and directorates, such as the Economic Affairs Directorate, have private sector units. However, such units are hardly visible or easily accessible. This may not be a challenge for large corporations, which are powerful enough to get direct representation via links with national governments or through their own economic clout. Rather, there appear to be few avenues for SMEs, which form the bulk of African economic activity, to engage ROs on transnational projects.

Meanwhile, only three of the eight RECs recognised by the AU have formal organs that represent the private sector. All of them lump together civil society, business actors, and other non-governmental groups.

Unfortunately, African RECs have a poor track record getting buy-in from the private sector at the critical initial stages of a project. This can cause significant problems further down the line, when decisions become even more political. At the launch of a new African Technical Business Advisory Committee (ATBAC) in 2017, the President of the Pan African Chamber of Commerce and Industry (PACCI) admitted that the private sector’s involvement in the CFTA negotiations had been “modest”. While the creation of the ATBAC fulfils the need for a private sector voice in the negotiations, it came months after the negotiations had already been launched, suggesting that the private sector had little opportunity to provide inputs at crucial stages of the project.

ROs are also rarely seen at the gatherings of businesses and private sector actors. In March, prominent African business leaders assembled at the Africa CEO Forum to discuss important challenges to their enterprises and fresh opportunities that were yet to be exploited on the continent. They were joined by leaders such as Ghana’s President Akufo-Addo and former Nigerian President Olusegun Obasanjo and representatives from related partner organisations such as the World Bank and the AfDB. The AU and the RECs were, however, absent, neither fielding speakers nor engaging with the event as sponsors or strategic partners. This despite many of the topics discussed at the forum, such as African airlines, digital transformation, and governance, being core issues to ROs.

According to K.Y. Amoako, former head of the UN Economic Commission for Africa (UNECA), the bottleneck for bringing the private sector on board stems more from habit and culture than practical considerations. Regional integration has had a top-down agenda with a strong intergovernmental focus, neglecting the private sector. “We forget that we need stakeholders to have a stake in the regional integration agenda. And we do not engage them.”

Member states have often signed agreements then forgotten to “involve the citizens in the discussions of what has been agreed”, he said. This has resulted in low awareness of regional integration issues in the business community. According to Amoako, businesses “don’t know much about it. And if they know they exist, they won’t pay much attention to it, because they don’t think it will lead to much, frankly”.

However, there is a precedent of regional policies working closely with the private sector. One example is the Africa Mining Vision (AMV), which stands out because regional decision-makers have made concerted efforts to involve the industry. Strategically, this makes sense because the project is geared towards harmonising activities in the mining sector, including those of its public and private stakeholders, to ensure “broad-based growth” and sustainable development and integration into the wider African market.

While Africa is the number one producer of many important mineral resources such as gold, phosphate, and chromium, much of it is exported in an unprocessed form rather than as value-added products. Furthermore, geological mapping in Africa lags behind other regions, such that exploitation of mineral resources is inefficient. The AU and UNECA decided in 2009 to enhance the output from mineral resources exploitation while ensuring sustainability and diversified industrial development. They formally launched the Africa Mining Vision in 2011 as a result.

Realising this vision, however, would require increased “private sector confidence and participation” while also ensuring their compliance with regulations on corporate governance, the environment, and their social impact. It would also require harnessing public-private partnerships and the promotion of regional integration to “facilitate factor flows”. Tripartite partnerships between governments, civil society groups, and businesses were also to be encouraged. African states were encouraged to strengthen the capacity of local businesses rather than foreign transnational corporations, which dominate the sector and are more likely to form linkages with local communities, fostering broad-based growth.

As a result, in 2016, the AU facilitated a new compact between governments and mining companies with the aim being “aligning key interests around the implementation of the AMV with those of the business community”.

African regional organisations have yet to realise the full potential of their relationships with the private sector. There is plenty of low-hanging fruit in the removal of trade barriers, even before moving to the narrower barriers that may be the result of strategic interests of certain states. Businesses would help to pinpoint these problems immediately, because they face those barriers every day. Quantifying the costs these obstacles create, and thus identifying priorities for lifting trade barriers, can only be done by surveying such businesses. Moreover, the private sector has the potential clout to push for implementation of policies that ROs care about.

Forging such a synergy, however, requires a change in culture and practice. For a long time, the AU and the RECs have recognised that there is a dearth of private sector input; yet, putting this realisation into practise means changing small habits first. One way is to woo businesses at their own gatherings and engage them on issues that are of interest to them. Forging stronger informal networks between RO representatives and business leaders could go a long way to strengthening communication. It would be good to heed the lessons of RO-business engagement from cases such as the AMV and the EABC and consider how these could bolster new projects in the future.

Dr Densua Mumford is a researcher in International Relations at St Antony’s College, University of Oxford. She studies the institutional design of regional organisations and the foreign policies of African states.