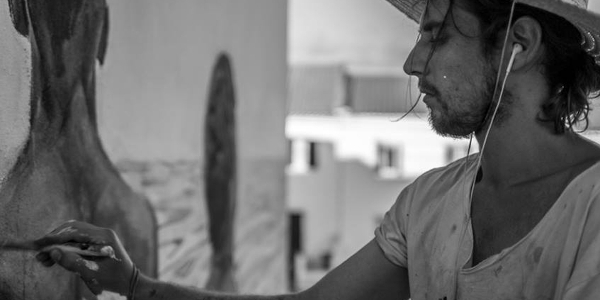 Ricky Lee Gordon (also known by his street artist handle, Freddy Sam) is an internationally acclaimed muralist and painter. He is mostly recognised for his street murals – which can be found across the globe from Mumbai to Azores to Kigali – and is responsible for the 40-metre tall Nelson Mandela mural in Johannesburg.

In addition to being a visual artist, Gordon is an entrepreneur, offering a specialist service that has caught the attention of international property developers and town planners.

“It is like any business. If you do it well and offer a really good product, then you will succeed,” he told How we made it in Africa.

Gordon’s first public street mural was completed when he was 16, and inspired by his surroundings. He grew up in Gallo Manor, a wealthy suburb of Sandton, Johannesburg, and witnessed his neighbourhood becoming ‘gated’ – cordoned off from the rest of the city securely behind walls and controlled entrances.

“It was very depressing because it used to be full of life, people commuting into the Sandton area through our road from the Alexandra township. Then all of a sudden it was a dead suburban area,” recalled Gordon.

“I was young enough to not understand, but old enough to question it.”

He used to watch the cars coming from Alexandra on the highway and one day he grabbed his paints and headed to the outskirts of the township, where he found an abandoned wall.

“I asked permission from the fruit and veg seller there if I could paint the wall behind him. He agreed and I painted my first proper production. It took me three days to do and it was an experience… I realised art wasn’t just art. It was a tool for me to see the world, to cross boundaries, to challenge myself, and to reflect.” 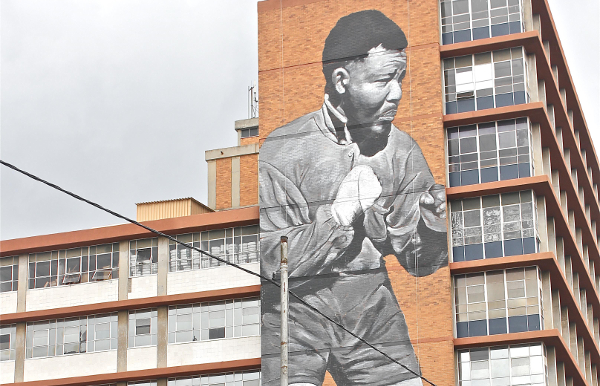 Gordon is also responsible for the 40-metre tall Nelson Mandela tribute in Johannesburg. The mural is titled ‘I am because we are’, and Gordon said he chose to paint the iconic image of him boxing as Mandela believed all were equal in the ring.

At 18 Gordon began designing clothes and started his own label, which attracted investment from financiers. “They taught me how to sell, how production and distribution work and the business side of things. It was a really good experience for me. My mother used to say while my friends were at university, this was my university.”

But when his investors decided to mass produce only three generic designs – as opposed to producing originals – Gordon realised he could not utilise his creative skills the way he wanted, and opted out.

“I was forced to realise I had to then buy back my clothing because they had already manufactured a large amount of stock from that year. So I accepted it, and it took me two years to buy back the product. I did it – and it was the best lesson ever.”

After that, Gordon worked as a creative consultant for brands and companies. In 2009 he launched A Word of Art, organising exhibitions and art project residencies – including international exchanges for artists and facilitating outreach activities in communities such as The Gambia and Swaziland. During this time he continued to develop his own reputation as a muralist, with his work increasingly gaining attention. Before long, he was being commissioned for projects across the globe.

“And now it is my livelihood,” he added.

The power of street murals in property development

Gordon has completed a number of murals for the Maboneng Precinct in Johannesburg’s urban core – commissioned by its young property developer, Jonathan Liebmann. The area, once derelict, has seen buildings regenerated into trendy mixed-use developments that have breathed life into the city. The use of art and design has attracted a younger, trendier crowd into the urban centre, and raised property values.

Gordon noted that street murals can be an extremely powerful property development tool that is generally used more frequently overseas than on the continent.

“Governments, corporations, property developers and private patrons have adopted muralism street art as a very cost-effective way of enhancing the physical environment. A sculpture can cost millions; a mural can cost infinitely less. It is also a permanent piece of artwork which is popular, and more accessible to the youth,” he explained.

“So overseas street artists and mural artists are doing very well and there is a demand.”

While there is some interest locally for street muralists, Gordon said most South African street artists have to look internationally to remain sustainable. He owes this to a negative perception in the country that street murals are in the same category as graffiti. As a result, municipalities and governments have introduced stringent laws around getting permits for murals – often resulting in off-putting requirements and long waiting periods. 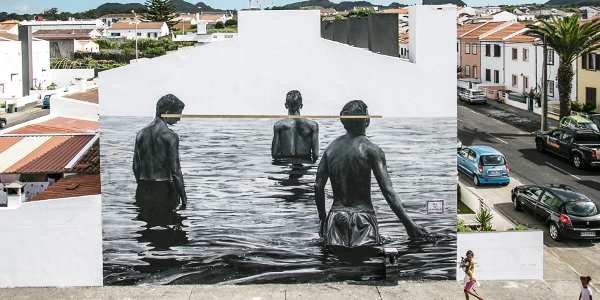 Gordon’s mural in Azores, Portugal titled ‘The road to solidarity’.

While street murals can play a part in uplifting property values in communities, Gordon highlighted this can also have a negative effect. Gentrification happens when properties in deteriorating low-income areas are bought and renovated by investors, causing overall property values to rise to the point that the existing families and small business can no longer afford the rent.

The process has been witnessed in urban centres globally – from Wynwood in Miami to Bo-Kaap in Cape Town – with design and art being an affordable tool used by developers. “And murals in fact have a social and economical power,” noted Gordon.

Cape Town’s Woodstock is also undergoing the process, with trendy developments such as the Old Biscuit Mill and Woodstock Exchange reimagining the community from low-income into an up-and-coming art and design hub that has been referred to as “hipster heaven”.

Gordon said he painted a number of Woodstock’s first murals, with the aim to upgrade the neighbourhood for the community.

“But now the gentrification wave has come and more and more murals have been painted, and there are actually mural tours.

“And the community can’t afford to live there anymore and are being moved out to places like Delft [a township on the outskirts of Cape Town]. And the landlords don’t care. Profit is their interest and they will use the murals, and the design economy [to attract] the upper class and the existing wealthy. So the rich get richer and the poor get moved,” he highlighted.

Despite gentrification having a potentially negative social effect, Gordon added street murals also have a positive role to play in communities. Its public nature means art gets taken out of galleries, allowing anyone to interact with it.

He advises other artists looking to pursue a profession in street murals to be sure they can produce on demand.

“And you should focus on the art, more than the money. When you focus on what you do and you do it really well, everything else actually sorts itself out in the end.”