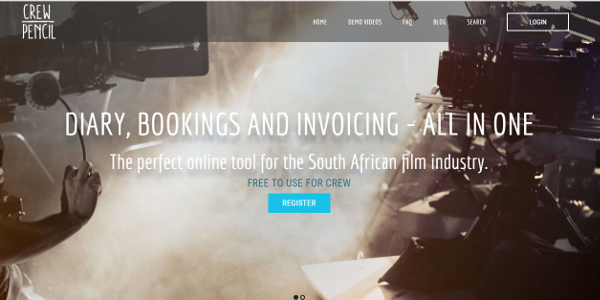 In May the chief operating officer of the South African Broadcasting Corporation (SABC), Hlaudi Motsoeneng, announced that starting in July 80% of all films aired on its SABC 3 channel will be locally made.

The news could potentially give a leg up to South African film and television industry, which is already seeing growth. It has created over 35,000 jobs and contributes more than R3.5bn (US$235m) annually, according to a 2013 study conducted by the National Film and Video Foundation.

Crew Pencil, launched last year, is an online crew booking and diary service. It aims to help production companies source and manage crew, as well as allow industry professionals to market their expertise and book jobs. For every booking made by production companies, Crew Pencil charges a fee. The platform has recently been named a South African finalist in the global Seedstars World start-up competition.

How we made it in Africa asks Michael Bothma (29), co-founder and operations manager at Crew Pencil, about getting the venture up and running, and the opportunities he sees for it both in South Africa and elsewhere.

1. Give us your elevator pitch in 50 words or less.

We’re an online crew booking and diary service, offering an alternative solution to crew wanting to manage their own bookings and diaries, as opposed to having to employ a crew agent to do it for them.

We had an initial seed investor who got on board right from the start and invested in us. This has since run out and the founders are covering costs at this stage. However, we did recently sell 2% of the company at a valuation of R10m (about $670,000).

We’re currently busy with our mobile app. So a lot would go towards building it, as well as towards some marketing. Then obviously the big thing would be for us to scale into the film industries of other countries, like in Nigeria and India – possibly even in the UK or the US.

4. How would you describe the state of the South African film industry?

From my experience of working in the industry for years, it is definitely on a big upward slope. Cape Town especially has been the hub of the service industry, which is foreign commercials, for quite some time – and I think it has recently experience quite a big surge in that. But beyond the commercial industry, the long format – such as feature films and TV series – are picking up in South Africa quite a lot. We are running out of studio space, so more studios are being built. I remember last year during the height of the season, you simply couldn’t find certain crew in South Africa – it was that busy. There is an interest in South Africa thanks to our weather and locations, but also for becoming increasingly known for having top quality crew. And obviously with the rand being in favour of [foreign companies], it does make South Africa a very attractive filming location.

5. What risks does your business face?

I suppose the only risk we are really facing is the company failing or not doing very well – although that is unlikely. We are an extremely lean software/tech start-up and aren’t taking too many risks other than the money invested into it thus far. There isn’t much competition, really. In South Africa we only have the traditional crew agents as competition. But there are similar products being launched in the UK and Australia.

6. So far, what has proven to be the most successful form of marketing?

Definitely social media and growth through word-of-mouth. Our industry is relatively small and closely knit – so that really has gone a long way. But otherwise it has just been door-to-door marketing and demonstrations at production companies.

7. Describe your most exciting entrepreneurial moment.

It was probably the first start-up event we participated in, which was the Net Prophet Sparkup event earlier this year. Being part of that and going through to the final round to pitch in front of investors was a great moment.

8. Tell us about your biggest mistake and what you’ve learnt from it.

I think we should have launched much earlier with less of a complete minimum viable product (MVP). I think we waited too long to launch because we wanted to just make sure it was perfect and we were offering a lot more. In hindsight I think we should have launched the MVP as a kind of listing database or directory first, before then going into offering more and building a management tool for production companies.

9. Plans for the future?

Before we move into other territories we would like to expand into other aspects of the industry in South Africa such as film gear, film suppliers like catering and vehicles – and possible even venture into locations.