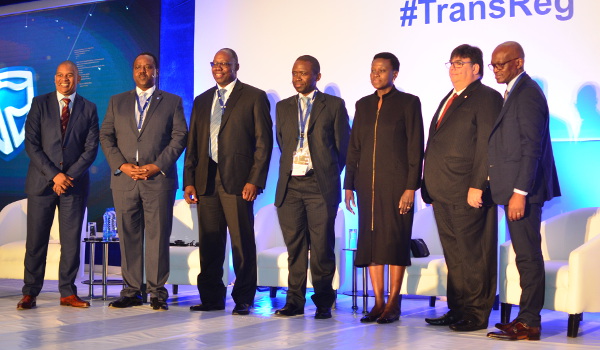 Standard Bank has escalated its highly successful trans-regional trade and business conferences into a broadly inclusive pan-African initiative aimed at driving collective growth across the continent.

This year’s Trans Regional Conference was held in Lagos from 1-4 July. Standard Bank invited clients from across the continent to participate alongside key government officials, legislators, and representatives of regional growth and development bodies.

Prior to Lagos, Standard Bank hosted two previous conferences in 2016: in Accra focusing on West Africa, and in Nairobi focusing on East Africa. These separate gatherings brought together clients and key Standard Bank trade experts and client relationship managers from the countries in each of these regions.

“These previous conferences showed us the scale of the opportunity for growing intra-African trade, especially the potential for cross-border trade, to change the growth trajectory of the continent,” said Zweli Manyathi, the chief executive of PBB at Standard Bank.

In addition to providing critical insight into how best to help clients leverage Africa’s full cross-border potential, “we also realised that increasing trade was a pan-African, and not just a regional opportunity for the continent,” he added.

Standard Bank’s broad and established footprint across the continent as a universal financial organisation, its sector expertise and networked global capital market presence, including high-level access to the Chinese banking system means that “gatherings of this nature can assemble, identify and unlock key intra-African trade and business opportunities – on a scale wide enough to transform Africa’s growth and development trajectory”, said Manyathi.

If the continent can increase trade between African countries to the global average – that is from 12% to 50% – the continent will be far less reliant on global trade and investment for its own growth. This will also mean that, for the first time in history Africa will be able to set and drive its own investment and growth agenda – independently.

“An additional feature of this year’s conference was the focus on leveraging Africa’s special relationship with China,” added Manyathi. The Industrial and Commercial Bank of China, the world’s largest bank, holds a 20% shareholding in Standard Bank, Africa’s largest bank.

This critical institutional relationship has resulted in various initiatives across the continent – from Renminbi trading, to Africa-China business centres, and landmark deals – that collectively constitute Standard Bank’s Africa-China trading corridor.