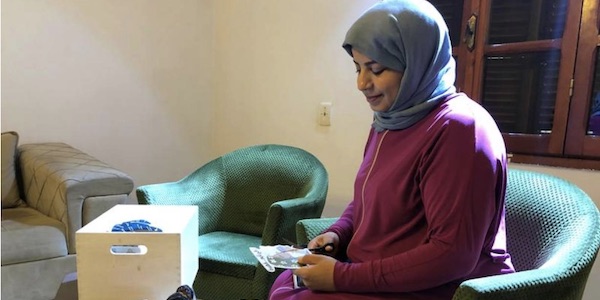 When inflation began eating into her state-paid salary Libyan architect and assistant professor Seham Saleh started selling drawings over the internet to help pay the bills. She joins a growing number of Libyan women launching start-ups in the conservative Arab country, where the strains on personal and family income following years’ of political chaos have forced women to look for more work.

Libya has only a tiny private sector, which means there is a market for locally-produced goods. The economy is dominated by the state, which employs most adults under a structure set up by Muammar Gaddafi, who was toppled in 2011.

Men are the traditional breadwinners, although around 30 percent of women were in the labour force as of 2015, according to a U.N. report.

“I cannot live on my assistant professor salary of 1,000 dinars (US$256) even if it is paid out,” said Saleh. She has been selling drawings of people in Libyan dress or book marks she created on a computer.

“Thank God… people wanted to buy the products,” she said. She also does freelance work as an architect.

Once one of the richest countries in the region, the chaos and civil war that ensued after the fall of Gaddafi has seen Libya’s living standards erode. Little is now produced in Libya other than oil, even milk is imported from Europe.

Cumulative inflation over the last four years has seen real incomes lose more than half of their purchasing power, and the government effectively devalued the dinar last September.

A cash crisis means public servants often do not get their salaries paid out in full. Lenders have no cash deposits as the rich prefer to hold their cash themselves, rather than deposit it in a bank.

Women rarely had jobs outside of sectors such as teaching, although the need for more family income has changed the situation, said Jasmin Khoja, head of a women’s business support venture.

Her organisation, the Jusoor centre for studies and development, has trained some 33 would-be female entrepreneurs, offers legal advice and office space as women often can’t afford their own.

While Seham’s “Naksha” art business is in its early stages, others such as Najwa Shoukri’s start-up are growing fast. She started designing clothes from home in 2016, and selling them online.

Now, together with five other women, she has a workshop selling 50 pieces a month and plans to open a shop next year on Jaraba Street, the main fashion shopping avenue in Tripoli.

To make the shop a success her output would have to rise to 150 pieces a month. Her brother and family have contributed to investments worth 10,000 dinars.

The biggest challenges for start-ups are legal hurdles and the lack of electronic payment systems.

Some Libyan commercial laws go back to the 1960s and are aimed at big corporations such as oil firms, not start-ups. Under these regulations firms need to deposit thousands of dinars.

“Banks do not give loans, which stops projects and makes them unable to grow or employ other women and young people,” Khoja said.

“There is big demand as many women are reluctant to go to a phone shop where men work, as they have personal files on their phones.”

This article was originally published by Thompson Reuters Foundation. It has been edited for publication here. Written by Ulf Laessing and editing by Alexandra Hudson.