South Africa’s West Coast could become a major oil and gas hub for the entire sub-Saharan Africa region, according to Warwick Blyth, executive director of the South African Oil and Gas Alliance (Saoga). 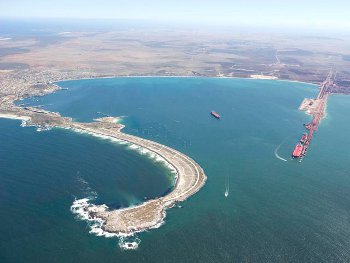 Saldanha Bay has the opportunity to position itself as a hub for regional oil and gas activity.

Speaking yesterday at a members meeting of business-led think tank Accelerate Cape Town, Blyth said the offshore area from Saldanha up to the Orange River Basin was an important area for oil and gas exploration and showed great potential for development.

Licences for the West Coast blocks were recently finalised and exploration and development activities are likely to pick up over the next 18 months with Forest Oil’s Ibhubesi project potentially leading with a large offshore development, pipeline to shore and a gas plant and power station near Hondeklipbaai.

Blyth explained an even larger opportunity for the West Coast is the provision of support, services and equipment to the oil and gas exploration and production activities in the sub-Saharan Africa region. Unlike oil and gas operations themselves the supply industries serving these projects could be very labour intensive; the ship and rig-repair business in particular had great potential to expand and create many jobs.

He said that Saldanha Bay, because of its available land, deep water port and established engineering community, had the potential to develop significantly as a hub for regional oil and gas activity, much like the Australian Marine Complex near Perth has for their oil and gas activities.

During the meeting it was suggested that Saldanha could overtake Cape Town as the maritime maintenance and repair hub of the Western Cape.