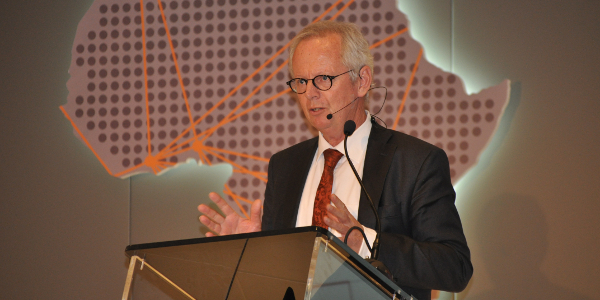 “Never a dull moment in South Africa at the moment – that is for sure,” said Konrad Reuss, the sub-Saharan Africa MD for rating agency Standard & Poor’s (S&P).

Speaking at the Thomson Reuters Africa Summit in Cape Town on Thursday, Reuss was referring to the news – released just an hour earlier – that President Zuma’s office had obtained an interdict to prevent the release of Public Protector Thuli Madonsela’s long-awaited state-capture report, which concerns the influence that a single family – the Guptas – has had on government affairs. The report was scheduled to be released Friday, but will now only be made public when (and if) deemed fit by the high court.

The news follows Monday’s fraud summons of the finance minister, Pravin Gordhan, based on charges related to the early retirement of a former deputy minister of the South African Revenue Service (SARS).

When asked to comment on this, Reuss simply said: “I think it just highlights that political risk has come to the fore more than ever. And, for instance, when it comes to his honourable minister and that he is charged now – in a business-as-usual situation a response from a ratings agency would obviously be that a rating does not hinge on a particular person or particular team.

“[But] in South Africa we are in a situation at the moment where everything is not business as usual. So in this situation, this kind of standard answer would send the wrong signal.”

“We took great comfort when we affirmed the rating in June [based] on the fact that the minister and his team were targeting a faster, more aggressive, fiscal continuation than what we had expected before. And I think to achieve these fiscal targets – which are important for us – it hinges on a team.”

Reuss’s carefully-constructed comments highlight a key determining factor for South Africa’s next S&P credit rating, set to be released on 2 December this year. The agency currently rates South Africa as BBB- with a negative outlook. This is one notch above a non-investment grade rating – or ‘junk status’. The country’s rankings by competitor agencies Moody’s and Fitch are not that much better.

South Africa has held junk status before. S&P labelled the country non-investment grade in 1994 and 1995 when it was transitioning from the Apartheid regime to democracy. While Fitch was still rating South Africa at non-investment grade in 2000 (up from BB status), the country had slowly worked its way up in S&P’s outlook, at BBB- in June 2000. In 2005 both agencies gave it a comparatively optimistic BBB+. However, that was where it peaked – it started to decline again in 2012.

“In 2012 there was very much a situation where it became obvious that growth expectations and growth performance in South Africa were disappointing. And we had to start taking recognition of the fact that South Africa had kind of managed itself into a bit of a growth trap.”

In December 2015 S&P gave the country a BBB- with a negative outlook, citing slow growth as a leading reason. This status was affirmed in June.

“When we affirmed the rating… we took great comfort from the fact that the minister and the national treasury showed a stronger commitment to fasten fiscal consolidation than what we had previously expected. And we just hope it remains that way. This will be critical in our assessment.”

According to Reuss, South Africa’s strong institutions have always been a silver lining when determining the country’s credit rating. “Be it the judiciary, be it the public protector, be it the constitution itself and be it the national treasury – those are extremely strong underpinnings for an investment-grade rating of South Africa.

“Any attempts to undermine these institutions – I think, from a ratings perspective we would certainly see that as a negative.”

However, he noted that recent events have led to political risk being highlighted as a major cause for concern in the rating’s June review.

“For anyone who has been following South Africa for a long time… you were always confident that policies would be in the right hands, would be orthodox, would be implemented, and on autopilot. I don’t think we are in that situation now. Politics and political tension has come to the fore – it is more than just political noise. That would downplay it.”

Whether political risk is undermining the country’s independent institutions – and impacting government policies when it comes to structural reforms – will be a key question asked by the agency when determining South Africa’s rating in future. And to avoid a downgrade to junk status in December, Reuss said the agency wants to see the Finance Ministry deliver on its fiscal targets.

“What gave us the comfort in June must stay the same. We want to see the minister and his team stick to the fiscal targets and to deliver.”