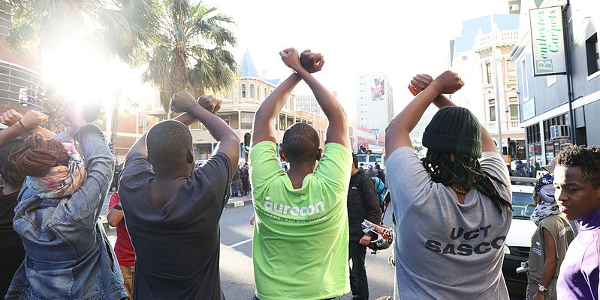 A group of students raise their hands in the air to signal that they have come in peace.

Last year in South Africa, universities and other tertiary education institutions proposed fee hikes of between 10% and 12%, sparking student protests that forced the shutdown of many of the country’s major universities. The student movement, dubbed Fees Must Fall, eventually led to government agreeing to a 0% fee increase for 2016.

But this year a proposed increase of up to 8% for 2017 reignited protests, resulting in damage to property and violent clashes between police and students. Students are now calling for free higher education for all, stating that the current university costs are affordable for only the wealthy (and mostly white) few. For most black students, who come from disadvantaged backgrounds created by the apartheid regime, equal opportunities to higher education aren’t a reality.

Universities, students and government have now reached a stalemate. There is a threat of the protests continuing next year and shutting universities down completely. In light of this, the University of Cape Town’s (UCT) Graduate School of Business (GSB) recently held a panel discussion on tackling South Africa’s funding crisis in higher education.

Here are some of the proposed solutions.

Many of the student protestors demanding free tertiary education believe that the solution lies in the government allocating more funds to the sector. Government argues however that there simply are no more funds available to allocate.

According to Neil Cole, executive secretary at the Collaborative Africa Budget Reform Initiative, there are other equally important priorities that need financing in South Africa. Determining which sectors get funding comes down to trade-offs.

He estimates that free higher education for all students will probably cost “somewhere between R85bn (US$5.9bn) and R150bn ($10.4bn), but probably closer to R150bn”.

“That would mean it would be the single highest expenditure item. It would be more than social grants. It will be far more than basic education and more than health. Does this look right in terms of where the spending pressures are, and all the things we have to do as a country?”

He said that the government could cut costs by privatising South African Airways (SAA), which has been surviving off large bailouts from the state. It could also cut unnecessary personnel or organisations – but this would still not bring in the amounts required.

“So I think it is about thinking out of the box here. I don’t think reforming the current model gets us beyond this crisis. I think we need models that are quite different, which opens up the possibility of other sources of financing.”

Another solution put forward by Cole is to remove the current government subsidies to higher education and adopt a sliding scale system to finance student fees. He proposes that each student’s fees are determined by their family’s income level.

Currently, a bachelor of arts degree is subsidised by the government to cost the average student about R100,000 ($7,000), including accommodation costs. If this subsidy is removed, it pushes the student fee closer to R200,000 ($14,000). With a sliding-scale system, the poorest students would have their entire university education covered (tuition, accommodation and so on), while the wealthiest students would pay the full cost of their education. Those in the middle would have 50% of their fees covered.

Another possible solution would be for universities to find alternative revenue streams that could cover or subsidise the cost of student education. One way to do this would be for students to generate income for universities, noted Susan de Witt, a senior project manager at the GSB’s Bertha Centre for Social Innovation and Entrepreneurship.

CIDA City Campus in Johannesburg is already trying to do this. The university offers its students free bachelor of business degrees and, according to de Witt, is 80% self-sufficient – although it does struggle to stay afloat.

“First of all, students are very much involved in the running and administration of the university itself… In addition to that they have started a call centre so they have a stream of income. Their students work in the call centre, and obviously they have benefits in not only generating income [for the university] but also in terms of work experience for those students.”

She added that students can also be used as academic mentors and tutors, even after they graduate. This would be one way of cutting back on staff expenditure, as well as for students to give back to their universities. For this to work, corporations will need to be committed to allowing time off for their fresh graduate employees to tutor students.

Cole agrees that monetising university assets and students could be the answer going forward. He added that government subsidies might be the reason that universities aren’t already doing this, saying that, “the incentive is not there”.

However, providing financial assistance is not sufficient to enable students to maximise their potential, noted de Witt. Many of the students who don’t graduate don’t have the support structures or necessary academic skills required – often because they are underequipped by their basic education schooling. High drop-out rates mean that large amounts of funding in the form of bursaries, student loans, and government subsidies are wasted.

“Access is not opportunity for them,” said de Witt.

For this reason, she supports the implementation of social impact bonds or outcomes-based contracts. These are contracts where the government pays for better social outcomes (such as increased graduation rates or higher pass rates in certain degrees) and part of this is passed on to investors.

Therefore, universities are incentivised to provide improved student support to ensure that the social outcomes are met.

“In Israel, for example, at university they are funding a computer science programme through impact bonds. Today their results have improved from a 30% pass rate to an 80% pass rate,” highlighted de Witt.

Getting the private sector involved

Ultimately it is the private sector that benefits from having an increased number of competent university graduates, and there is potential to improve the sector’s participation in funding students, according to Heather Sonn, managing director at Gamiro Investment Group.

Students who have their higher education funded by companies can pay back their loans while working for the company after graduation. Or this loan can be sold to a new company who wants to poach them once they are in the workplace. Funding by the private sector also allows for a greater focus on producing graduates in industries with a demand for certain skills.

“It is about getting corporates more involved in education as an investment rather than a social do-good so that they pull graduates through the sector,” said Sonn.