“There is no doubt that what we are seeing today with the mining strike is a tragedy.” 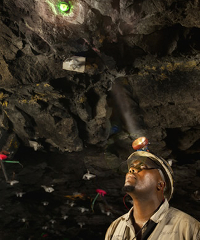 This was emphasised by Michael Spicer, the former CEO of Business Leadership South Africa, speaking at a roundtable discussion on the South African platinum mining crisis, held by the University of Cape Town’s Graduate School of Business.

Since the end of January close to 70,000 platinum mine workers have been on strike in South Africa, the longest and costliest strike the industry has ever experienced. South Africa holds over 80% of the world’s platinum reserves.

The demands of the strikers have been clear and unwavering from the start: they want a substantial increase in monthly wages. The Association of Mineworkers and Construction Union (AMCU) is demanding a R12,500 (US$1,166) basic wage, although it did concede in March that this could be arrived at over a period of four years.

However, the platinum mining companies – Anglo American Platinum, Impala Platinum, and Lonmin in the North West platinum belt – say this is simply unaffordable.

There are conflicting figures in the media on the current wage for entry level underground rock drillers in South Africa. However, Andile Sangqu, group executive of sustainability and risk at Impala Platinum, said this week that the minimum monthly pay at his company is R5,500.

On top of this, miners get a holiday leave allowance of R458, a living out allowance of R1,850, estimated medical aid of R600 and an employer contribution of R888 goes towards the provident or retirement fund for each worker. The current basic minimum guaranteed pay (cost to company) of an underground employee at Impala therefore is R9,297 per month. Additionally, employees can earn bonuses for producing above the production targets.

There has been talk that further wage increases will have to be subsidised by laying off workers. Those that stand to lose the most are the underground rock drillers that are generally low skilled and illiterate. They will struggle to find employment outside the mining industry.

“It is a human tragedy first and foremost, not only in its current effects, but also in the unfortunate future likely effects,” said Spicer. “It is also a tragedy for the South African economy. Again, not just for the industry but the broader economy as we have seen by some of these statistics that have been emerging on the impact of this strike.”

Statistics South Africa reported that GDP decreased by 0.6% in the first quarter of 2014, compared to an increase of 3.8% during the fourth quarter of 2013. The mining and quarrying industry was the main contributor to the drop.

According to the platinum companies’ website dedicated to the strike, over R9.9bn has been lost in employee earnings since the strike began, and the companies’ revenues have taken a R22.2bn hit.

Sangqu explained that even before the strike began, the industry has been in crisis. “An estimate from the Chamber of Mines indicated that almost half of the platinum mines in the country were not making profit,” he noted.

“This strike is affecting those operations that are most vulnerable. Employee remuneration currently accounts for about 50-55% of operating costs of these mines and any increase has a significant impact on overall costs. Despite this, increases in recent years have consistently been higher than supply. AMCU’s demands – even if it’s tempered over four years – represents an annual compounded increase of 23%. That is simply not affordable to us.”

According to Sangqu, if one looks at the platinum basket price of R25,000, about R10,000 of production cost relates to labour. Other expenses make up an additional R10,000. “And that leaves us with about R5,000 which we use for new projects. If we were to add a 9% wage increase, that takes us over the R25,000 that we get currently at the current platinum price. At the current AMCU wage demand, this amount goes close to over R30,000 per platinum basket price,” he continued.

“It will be irresponsible of companies to agree to increases that would cause irreparable damages to our businesses and result in significant restructuring and consequent job losses. Indeed if the increase cost base is not offset by projected earnings and productivity improvements, the business will be in financial stress and it will have to take drastic action to restore profitability to be sustainable.”

Last week in London, Mark Cutifani, the Anglo American CEO, said that platinum miners in Australia were typically paid five times more than those in South Africa. However, he argued that the productivity in the South African platinum sector was one tenth of that in Australia, adding that in order to pay miners more, productivity would have to improve.

Spicer agrees. “There is no way out of this mess that we are in without addressing productivity and of course that requires stability, it requires training, but ultimately it requires less people.”

He pointed out that a major difference between the Australian and South African models was that platinum mines in South Africa typically go deep underground and employ thousands more people.

“This is an absolutely vital point when people make international comparisons with the norm, say for example in Australia, of mines that are surface mines that employ hundreds, maybe five-hundred, maybe a thousand people at the most. These are radically different types of operations.”

If this model was adopted, said Spicer, South African platinum mines would employ higher skilled labour at higher wages, be more productive, but inevitably they would be less labour intensive. He believes that the strike will ultimately accelerate the move to this model. “Deep level mining on the current model is no longer financially feasible and will come to an end over a period of time.”

“Clearly that means significant labour losses in an environment where we already have a very high level of unemployment. So all hands will have to come to the deck in terms of retraining. This will be a task for the industry, for government, for all stakeholders.”

Cause and effect: concerns over the future of mining

Internationally, the strikes paint a dismal picture for foreign investors looking at South Africa. There are fears of a repeat of the Marikana massacre where, in August of 2012, striking miners violently clashed with the South African police at a Lonmin mine. Forty-four people were killed and over 70 injured. The event shocked the world.

According to Spicer, AMCU is a product of Marikana, where rock drillers felt they were getting less remuneration than other miners who were largely represented by the National Union of Mineworkers (NUM).

“[The rock drillers] feel badly done by,” he explained. “They have one of the hardest jobs. And they feel that they are getting less remuneration than the miners – these are people with formal mining qualifications, and… are the first line of supervision.”

On the company side, management is under pressure from their investors, noted Spicer. “Capital providers… who have got, since 2008, a miserable return on their capital and who are determined now that enough is enough; that management must not give away more of the non-existent benefit at the expense of the sustainability of this enterprise. And so these two parties remain far apart.”

“Productivity, as I have said before, is the key issue. This is what makes the industry viable given the cost straight jacket. Unfortunately this is not a subject easily spoken about; unions have been utterly resistant. And management in my view has been weak, limp-wristed, in not finding ways to have this conversation,” said Spicer.

On Saturday, South Africa’s newly appointed Mineral Resources Minister, Ngoako Ramatlhodi, threatened to bow out of the strike negotiations between platinum companies and workers if an agreement wasn’t reached soon.