South Africa wants to explore business and investment opportunities in the Republic of the Congo, says President Jacob Zuma.

“The South African business delegation wants to explore business and investment opportunities in the Republic of Congo. As government we fully support the development of stronger business to business linkages between the two countries, hence the agreements that we have finalised,” said Zuma. 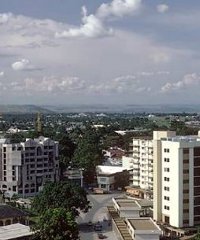 The Republic of the Congo's capital Brazzaville.

In 2005, the two countries concluded the Bilateral Trade Agreement and the Reciprocal Promotion and Protection of Investments Agreement. Zuma said yesterday’s signing of the Memorandum of Understanding on Economic Cooperation will further deepen technical, trade and industrial cooperation.

He also acknowledged the Memorandum of Understanding that was signed between the South African Chamber of Business and the Congolese National Chamber of Commerce and Industry in 2006.

Zuma said there are various opportunities that the South African business community should explore in Congo, adding that while it was commonly accepted that the oil and petroleum sector was the biggest revenue earner in Congo, agriculture and other industries were equally important as part of diversifying the economy.

The oil and petroleum sector contribute to more than 60% of the nominal GDP.

“We note and applaud all efforts by the Congolese government to revitalise the country’s agricultural sector. We welcome the long-term land lease agreement of over 200,000 hectares of idle farmland to a consortium of South African farmers.

“We believe that this is one of the key areas of economic cooperation that our two countries can exploit, with clear tangible outcomes,” explained Zuma.

Zuma said the outcome of this will not only improve food security in that country and its neighbours but it will also stimulate non-oil sectors and secondary industries.

“We remain convinced that by fostering closer trade and investment ties we would be able to mobilise to maximum level, our collective resources, thereby promoting substantive intra-Africa trade,” he said.

Zuma said there are also potential investment opportunities in transport, infrastructure development especially in road, maritime and rail construction, mining and tourism development among other areas.

He called upon South African businesses to seize these opportunities and invest in the economy of the Congo. He said the private sector should integrate itself into the rest of the continent.

“We are part of Africa and our economy and our fortunes are linked to those of fellow neighbours and the rest of the continent. Our business community is aware of this imperative and respond positively to our call,” said Zuma.  – BuaNews