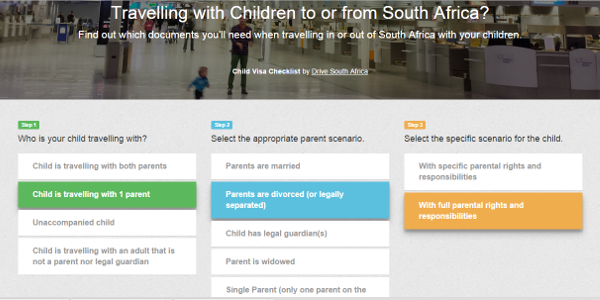 “When life gives you lemons, make lemonade. It might sound a cliché but it is exactly what we did here.”

This is according to Andre Van Kets, co-founder of travel company, Discover Africa Group. One of its divisions is the vehicle rental agency, Drive South Africa, which has recently introduced a new mobile and web app to help travellers navigate South Africa’s new child visa regulations.

At the start of June, South Africa’s Department of Home Affairs announced new laws which require minors (under 18) travelling to and from the country to carry particular documents in addition to a valid visa and passport. However, requirements differ depending on the scenario and guardianship the child is travelling under.

For example, a child travelling with one divorced parent with full parental rights requires an unabridged birth certificate and court order granting parental responsibilities to the travelling parent. Whereas an unaccompanied child will have to travel with anywhere between six and nine documents – depending on their particular guardianship scenario – including a letter and proof of identity of the person who is to receive the child in the country travelled to.

The new regulations are similar to other travel requirements in countries such as the US and UK, with the aim to curb child trafficking and child-custody disputes. However, while Van Kets believes the new laws are necessary, he said they can be confusing and hard to navigate.

“We thought that the documentation [Home Affairs] gave us was far below adequate. It was full of jargon… It wasn’t very clear at all,” he explained.

“They have all the right intentions, and they are a great enforcement agency, but they are not great on communication.”

Van Kets said it became the role of travel companies to communicate the new requirements. “And the reason we created the app was to present that information in a much simpler format.”

The app takes a few seconds to navigate – a simple 3-step process whereby users can enter in their particular child travel scenario, and instantly get a checklist of the documents required.

In just a few weeks the app already has over 14,000 users from 129 countries, and Van Kets said the added-value free service has brought in a lot of good publicity and traffic for the company. “We wanted our name to be associated with a good story, and a solution to a problem.”

The new child visa regulations has caused some controversy with many members of the tourism industry complaining the new laws are so confusing that they might deter travellers.

For example, the Tourism Business Council of South Africa expects 100,000 tourists may be lost this year due to rigid visa requirements, translating into a loss of R1.4bn (US$113m) in spending.

However, Van Kets argued that the real effects of the laws will not be felt immediately, and warned against exaggerated figures that might be published to prove a point.

“I think there will be a small negative effect on arrivals but it is not going to be right now. People travelling now booked maybe six to 12 months ago… And what has happened is a lot of people reported downtrends over this quarter or half year cycle. But I think it’s still a hangover from a lot of bad press coming from the Ebola scare a year or so ago,” he continued.

“If we do see a downturn directly related to the new visa laws, it’s probably not going to be right now – it’s just won’t be that immediate. It takes three to six to nine months for that to take place.

“So I think it’s vital that someone moderates it carefully and reports on it accurately, rather than mis-contributing the cause of ups and downs.”