The mining industry could do a better job at community development in Africa, according to Randgold Resources CEO Mark Bristow. 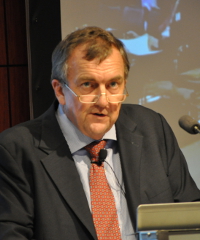 “[Mining companies] build billion dollar mines and don’t invest in the communities, and then wonder why everyone gets angry with us,” said Mark Bristow, Randgold’s CEO.

“[Mining companies] build billion dollar mines and don’t invest in the communities, and then wonder why everyone gets angry with us,” he highlighted during Randgold’s year end results presentation held earlier this month.

His comment was in response to a question concerning Randgold’s community development activities at its Kibali gold mine – a joint venture between Randgold, AngloGold Ashanti and state miner Société Miniére de Kilo-Moto, located in the Orientale province of north-eastern Democratic Republic of Congo.

According to Bristow, one of the major reasons why the company’s Kibali operations have generally been successful is due to Randgold’s investments in developing the community. And he cites population growth as evidence of this.

For example, when Randgold first arrived in the town of Doko to start developing the Kibali mine the town’s population was at around 40,000. In just four years, the town has expanded to about 500,000 people. “So somebody must think we are doing something better than what was there before we arrived.”

However, with this population growth come additional challenges. “Everyone wants a job and the mine can only deliver so many jobs,” added Bristow.

“The way we are dealing with that is [through] our long-term sustainability projects… We take part of our cash flows and reinvest it into sustainable agribusiness. We are far advanced now in a feasibility to develop – with outside investors and the Congolese government – a big palm oil agribusiness which will employ over the next five to seven years about 10,000 people.”

He believes this will also inspire investments into other agribusiness activities in the area, such as the farming and production of grain.

Randgold has also developed abattoirs for local food production, and Bristow noted the company has reached a point where it no longer has to import food to supply the Kibali mine.

Keeping investments in the country

The local population are one of the key stakeholders for successful mining activities, and Bristow said Randgold has invested in providing not only labour jobs to the Congolese, but also key leadership positions.

“Today more than 60% of our management in Kibali is already Congolese,” he highlighted, adding the goal is to bring this figure closer to 100%.

The same goes for supporting services, and businesses such as sub-contractors. Bristow said the company always looks to employ and invest in the skills development of companies in local towns, the province, the country, and then the region and continent, before looking to employ those from elsewhere in the world.

“This is important because we want to see the money we invest in that country [actually] go into the country. So for instance if you have got [a mine’s] labour as Congolese but you have all your management and technical people as expatriate, two-thirds of your salary bill leaves the country.”