Imagine for a moment the impact of a US$1tr African agribusiness sector on the lives of Africans. Currently worth about $313bn, the sector already provides jobs for 70% of the poorest people on the continent. An increase greater than threefold will bring jobs to lift millions out of poverty; most stomachs will be filled with nutritious meals, Africa’s agricultural exports will dominate global markets, and the continent’s farmers, who have borne the brunt of harsh economic conditions, will get a new lease of life as they become competitive in the global marketplace. 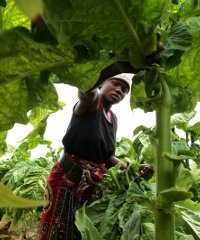 This is not an unreachable dreamland. A World Bank report published in March 2013 argues that it could soon be a reality. The report, Growing Africa: Unlocking the Potential of Agribusiness, projects that African agribusiness could be worth $1tr by 2030. It’s the latest in a string of positive reports about the continent’s socioeconomic development prospects, despite political instability in a handful of countries.

But no magic wand will cause a $313bn agribusiness sector to grow into a $1tr behemoth. The World Bank cautions that everyone will have to work hard – governments, the private sector, farmers, and so on. However, the elements for a pole-vault jump are in place. For example, in addition to huge, untapped water resources, Africa has more than 50% of the world’s fertile and unused land – that’s a whopping 450m hectares. The continent uses only 2% of its renewable water resources, while the global average is 5%. The steady and increasing private sector interest in African agribusiness is just the icing on the cake.

Also, while global prices of agricultural commodities are rising due to increasing demand, supply of these commodities is slowing due to factors like land degradation and water scarcity in many countries, especially in Asia. “Water scarcity has become a major constraint because of competition from rapidly growing industrial sectors and urban populations,” states the Word Bank. Yet Africa has both water and land in abundance.

At first glance, the World Bank report paints a glowing – even celebratory – picture of African agribusiness prospects. But the report also rigorously highlights many stubborn and recurring obstacles in the path of development progress. It states that “to generate the jobs, incomes and food so badly needed for Africa’s growing population over the next 20 years, agro industries need to undergo a structural transformation”, and it calls for more concerted investment in the sector.

African agribusiness desperately needs improved infrastructure. “Infrastructure is a high priority for jump starting agribusiness throughout Africa. Best bets for infrastructure are irrigation, roads and markets,” according to the report. In 2010, for instance, Africa produced 1,300kg of cereals per hectare of arable land, which was about half of what South Asia produced per hectare, according to the World Bank. A major reason for that low production is African countries’ low percentage of irrigated arable land, only 3% on average compared to a 47% average for Asian countries, states the Food and Agriculture Organisation. On top of that, a lack of rural roads impedes farmers’ access to markets and increases post-harvest losses.

Although increased financing is needed in the agribusiness sector, there have been improvements lately, notes the report. Even so, only 7% of Africa’s agriculture comes from foreign direct investments, compared to 78% for Asia. The good news is that due to rising commodity prices, “the appetite is growing among investors, private equity, and investment and sovereign funds to tap into Africa’s agriculture and agribusiness markets”.

Partially because of the lack of infrastructure and investment, a continent with half of the world’s fertile land spends $33bn on food imports annually, including $3.5bn on rice imports. Gone are those years, in the early 1990s, when sub-Saharan Africa was a net exporter of agricultural products. Currently, imports are as much as 30% greater than exports.

The report suggests it should be astonishing that developing countries such as Brazil, Indonesia and Thailand export more food products than all of sub-Saharan Africa combined. “The value of agricultural exports from Thailand (a country of 66m people) now exceeds that of all sub-Saharan Africa (a region of 800m people).” This situation is not sustainable, says Gaiv Tata, the World Bank director for financial and private sector development in Africa. “African farmers and businesses must be empowered through good policies, increased public and private investments and strong public-private partnerships.”

It’s not as if African leaders need any convincing about the need for more investments in agriculture, but more actions must match their words. In 2003, the New Partnership for Africa’s Development (NEPAD), an African Union framework for the continent’s socioeconomic development, launched the Comprehensive Africa Agriculture Development Programme (CAADP) “to eliminate hunger and reduce poverty through agriculture”. By signing on to CAADP, most African governments agreed to invest at least 10% of their national budgets in agriculture and to raise agricultural productivity by at least 6%.