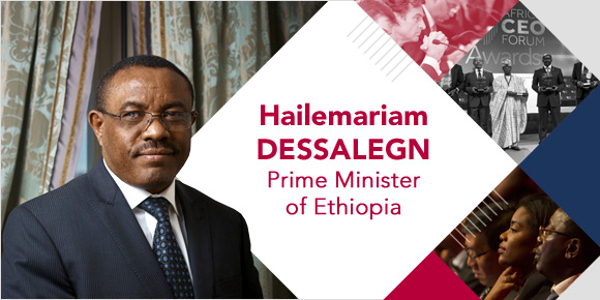 Hailemariam Dessalegn, Prime Minister of the Federal Democratic Republic of Ethiopia will participate in the 5th edition of the Africa CEO Forum, alongside 1,000 international and African economic decision-makers, including 300 top investors.

As the second-largest African market, Ethiopia is one of the most robust and best performing economies on the continent, with a two-digit growth rate over the past 10 years (a 10.8% annual average since 2005).

Accompanied by a delegation of Ethiopian CEOs, the Prime Minister will present the strategic orientations of his economic policy as well as several concrete investment projects in high potential sectors. The Ethiopian Government has launched significant programmes in sectors such as transport, telecommunications, energy and industry, especially textile industry, to accelerate the structural transformation of the country’s economy.

The Ethiopian Prime Minister will also participate in the “Head of State panel” where he will discuss Ethiopia’s economic outlook, highlighting the private sector’s role in its growth dynamic. In 2016, the Presidents of Côte d’Ivoire and Ghana participated in this unique panel which has since become a highlight of the Africa CEO Forum’s programme.

Set up in partnership with the African Development Bank, the Africa CEO Forum is an event organised jointly by Groupe Jeune Afrique, publisher of Jeune Afrique and The Africa Report, and rainbow unlimited, a Swiss company specialising in the organisation of economic promotion events.

The 2016 edition of the Africa CEO Forum played host to nearly 1500 African and international public figures including 600 CEOs from 43 African countries as well as 100 high-level speakers, cementing its status as the foremost international event dedicated to the development of the African private sector.