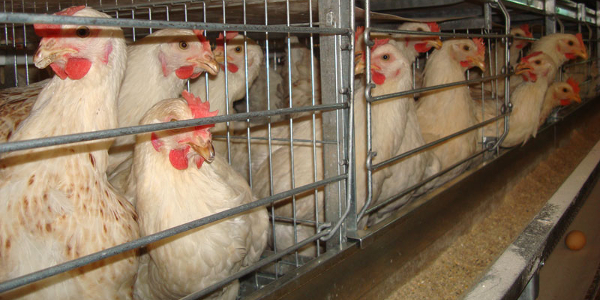 Yesterday executives, union workers and employees of South Africa’s chicken industry marched to the European Union (EU) offices in Pretoria to demand an end to the dumping of cheap chicken imports in South Africa. They say this is destroying the local industry.

In international trade, dumping is the act of exporting a product to a foreign market at a price lower than what is charged in the home market. In this case, it’s chicken leg quarters being exported cheaply by the EU into South Africa.

In developed countries the chicken breasts and wings are most desired among consumers as they are perceived healthier – and this has led to a surplus of other chicken parts, like the thighs and drumsticks. These do not sell as quickly and so European companies look to export this excess to other markets. They’ll take what they can get for it, because anything is better than nothing, and today this can be seen in South Africa.

However, local industry players are claiming this dumping is making it impossible for them to compete.

“If it carries on at the rate that it is going at the moment, the whole industry will be gone within 12 months, and so will our company,” says Scott Pitman, MD of the consumer division of RCL Foods, formerly known as Rainbow Chicken.

“We will just be left supplying a little bit of fresh markets and food-services industries that can’t rely on imports.”

RCL Foods reported a 11.9% loss in headline earnings for the year to June 2016 and last week retrenched over 1,000 workers at a plant in KwaZulu-Natal.

“It is not about a lack of competitiveness. No country in the world can compete with dumping,” he told How we made it in Africa.

South Africa is one of the few countries left where producers from Europe and the Americas can export their chicken leg quarters. China has raised tariffs and health barriers to restrict imports, while Russia has banned Western imports completely. African countries, such as Nigeria and Kenya, have also protected their industries.

In December, the International Trade Administration Commission of South Africa (ITAC) imposed a provisional “safeguard duty” of 13.9% on frozen bone-in-chicken from the EU. This follows anti-dumping tariffs ranging from 3.86% to 73.33% on some chicken from Germany, the Netherlands and the UK. The Food and Allied Workers Union is now calling for additional tariffs of up to 40%.

However, some local players say these are not enough to protect the industry.

“The [EU] exporters have become price takers… They have nowhere else to sell these leg quarters so they will take whatever price they can get, which is why tariffs don’t work anymore because if we introduce another 20% tariff, the importer – with nowhere else to sell their leg quarter – just has to lower its price by 20% because he has no other options,” explains Pitman.

“At least they get something rather than having to chuck the chicken away.”

On the other hand, the EU denies that its imports are responsible for the problems facing RCL Foods and other South African companies. According to Cecilia Malmstrom, the EU’s trade commissioner, the poultry industry is “suffering from structural problems affecting its competitiveness”.

Azar Jammine, chief economist and owner of Econometrix, notes that severe drought has placed strain on the industry with the price of maize (used in chicken feed) shooting up from R1,700 per tonne in 2015 to a record high of over R5,000 last year.

“So when the basic costs of your most important input increases in price to that extent, you become uncompetitive,” he explains. “Then superimpose on that all these trade issues and you have a situation where you have an industry that is suddenly on its knees.”

But industry producers say that the problem is not structural at all, citing a study by the Wageningen University in the Netherlands. It states that the South African poultry producers are more competitive than those in the EU – and Pitman argues that if the EU had to export whole birds to South Africa, it would be unable to compete on price. According to Bloomberg, the study found that South Africa’s whole-chicken costs were about 20% lower than in Europe. However this is based on 2013 figures.

For Pitman, the solution lies in imposing the same technical trade barriers (rather than tariffs) on the EU that South Africa currently faces with its exports to the EU.

For example, he explains that cases of Avian flu – a highly contagious viral disease also known as bird flu – found in South African ostriches has led to long-term bans on chicken imports.

“The EU and USA say they need to come and personally visit our country to certify that our flocks are clear of Avian flu… and they hardly ever come. So for decades we just go on with them having never inspected our flocks, and we are never cleared because every year or two our ostriches get flu.”

“But when their poultry gets Avian flu – which by the way they have got at the moment in both continents – they tell us they won’t accept our officials coming to certify their flocks, and will tell us when they are clear. And then they tell us after two-and-a-half to three months that they are clear.”

“Just do to them what they do to us, which is that we need to check their flocks in the same way that they need to check our flocks. That will slow the whole process down and be a major assistance to the speed at which they get re-certified – if they ever do because they keep getting Avian flu every year.”

Kevin Lovell, chairperson of the South African Poultry Association, told City Press that around R7bn worth of EU-imported chicken leg quarters came through Durban’s harbour last year at a cost of R10/kg – half the industry’s standard price.

Pitman told How we made it in Africa that this does not translate into savings for consumers as middlemen and retailers simply make bigger margins. However, Viccy Baker, founder of Red Gekko’s Retail Price Watch, disagrees. Her company is dedicated to providing information on consumer good prices in South Africa, and she believes that the price of frozen chicken has remained stable in real terms over the past year – despite food inflation – because of these cheaper imports.

“If no tariffs were to be imposed that situation would be maintained. However, the government has already imposed a [13.9%] tariff on frozen chicken and is expected to put a further 40% tariff on its import. Already, in anticipation of that, frozen chicken prices have risen dramatically in January.”

For example, according to Baker a 2kg mixed portions bag of chicken pieces packaged by the retailer, Spar, cost an average of R47.99 in the last quarter of 2016. But in January the price jumped to an average of R67.99 – representing a 41.7% increase.

Anthony Black, a professor at UCT’s school of economics, adds this will particularly be felt by low-income consumers.

“Chicken is a basic source of cheap protein for people… and I understand it is one of the products where there has been lower inflation of prices over the last while. So, obviously, restricting imports could play a role in driving up prices.”

However, Mike Schussler, chief economist at Economists.co.za, says ultimately a collapsed poultry industry will affect the consumer even more in the long run.

“We would have a bigger current account deficit because we are importing even more chicken… The rand is then even more likely to decline, and that rand decline will increase again the price of that same chicken… but by then we won’t have an industry that could be doing things here for us to help keep the prices more stable,” he continues.

“On top of that, when you have a bigger current account deficit, other prices also go up because when the rand falls it also impacts on the price of petrol, alcohol, paraffin, coal and all those things. So the impact could be quite huge.”

“There are a number of issues to balance. One is the effect on prices, another is the effect on the local industry in terms of employment, and the viability of local companies. Where we seem to be doing better is in the higher-quality chicken which is obviously more expensive and I think the companies operating in that area are less under threat,” he notes.

“And then the other thing is the potential adverse effects in terms of our trade relations, and that is a possibility. But again I think it depends on exactly how this is negotiated.”