Since our launch in April 2010, How we made it in Africa has interviewed some of the most interesting individuals currently shaping Africa’s business landscape. Here are our ten most-read interviews of all time: 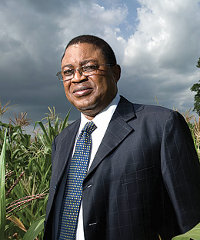 How we made it in Africa's interview with Dr Monty Jones proved popular among readers.

1. Interview with Zim farmers in Nigeria

In 2004 a group of Zimbabwean farmers, who lost their farms as part of Zimbabwe’s land reforms, were invited by the Kwara State Government to relocate to Nigeria and start with commercial agriculture in the state. Based near the town of Shonga, the group focuses on crop cultivation, dairy and poultry. Jaco Maritz caught up with Graham and Judy Hatty to find out how things are going. Read more

2. Exclusive interview: The woman behind M-PESA

In an exclusive interview with How we made it in Africa, Susie Lonie talks about how M-PESA’s success surpassed her own predictions and shares her thoughts about the future of mobile banking in Africa. Read more

3. Insight into doing business in Angola

Doing business in Angola can be challenging and foreign companies need to do their homework before entering the market. How we made it in Africa asked Roger Ballard-Tremeer about the country’s business environment. Read more

5. How to invest in Africa’s agriculture sector

Kalahari.net, the South Africa-based online retailer, has over the past year expanded into two new African countries, namely Kenya (kalahari.co.ke) and Nigeria (kalahari.com.ng). How we made it in Africa interviewed Gary Hadfield, the company’s chief executive officer. Read more

As Africa’s most populous country, Nigeria holds considerable potential for business and investment. How we made it in Africa interviews Dianna Games, CEO of the South Africa-Nigeria Chamber of Commerce. Read more

8. How to invest in Angola’s property sector

How we made it in Africa spoke to Francisco da Cruz, executive director of the U.S.-Angola Chamber of Commerce in Angola, about how to invest in Angola’s property industry. Read more

Nigeria’s power supply problems are having a detrimental effect on the country’s economy. A local company, Geometric Power Ltd, has taken the bull by the horns and is currently developing its own independent power project (IPP) in the southern city of Aba, Abia State. Jaco Maritz asked Oseloka Zikora, senior manager, public affairs at Geometric Power, about the status of the project and Nigeria’s power sector in general. Read more

Barely three years ago, Victor Rasugu (29) and his two friends, Janet Otieno (32) and Charles Nyawire (36), could hardly dream of getting into the competitive world of cosmetics, an industry dominated by large multinationals. The three friends knew that they had to be innovative to evade joining the ever increasing numbers of educated but jobless Kenyan youths. Dinfin Mulupi spoke to Victor Rasugu, managing partner of Melrose Bounty and Bown (MBB), about the company’s success and his ambitions for the firm. Read more