Angola’s property sector has seen significant growth over the past years. How we made it in Africa spoke to Francisco da Cruz, executive director of the U.S.-Angola Chamber of Commerce in Angola, about how to invest in the country’s property industry. 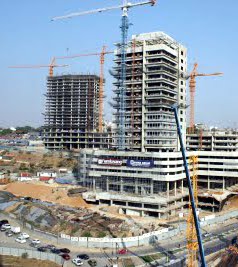 How would you describe the potential in Angola’s property sector?

Over the last eight years the Angolan economy has been booming as a result of peace and stability and a better macroeconomic situation in the country. The government’s reconstruction programme has created a number of business and investment opportunities, particularly in the construction, infrastructure and agriculture sectors. Development has been fuelled in some ways by big loans that the government has secured from China to invest in infrastructure rehabilitation. So we have seen the rehabilitation of roads, railways and bridges, thus enhancing the free flow of people and goods countrywide.

The government has embarked on an ambitious programme to build one million houses over the next four years. During more than three decades that lasted the war, almost no investments were made in real estate development, and now there is a big shortage in the housing and office space markets. Opportunities are not only emerging in Luanda and the other big cities but also in the interior of the country. The whole country is opening-up for business, offering good and enticing business opportunities for investors.

What are the most common mistakes made by foreign investors when they invest in Angola’s property sector?

I think up to now, most of the investors have been doing very well, except maybe for not getting into the market sooner. But as the situation continues to improve and output increases, investors will need to become more pragmatic in terms of prices, and their expected returns on investment. A few years ago one could sell units in a development even before construction started. The layout and the plans for new housing developments were enough for buyers to commit. The property market is, however, becoming more competitive.

Is it possible to secure financing for property investments locally?

You can get financing locally as long as you provide the guarantees the banks are looking for. A couple of years ago it was much easier [to get financing] but due to the international financial crisis banks have become more conservative in providing loans. But one can still get it locally.

What are the first steps foreign companies should take if they want to invest in Angola?

As a foreign entity you have to contact the Angola National Private Investment Agency. Then you need to decide if you are going to do it alone, or in partnership with a local company. Having a local partner helps you to navigate through the bureaucracy. A local partner would usually also have a better understanding of how the market operates and is in a privileged position to identify prospective opportunities.

Why is Luanda one of the most expensive cities in the world to live in for expatriates?

There are two main reasons for this. The first reason is because of the oil industry. As far as real estate is concerned, oil companies are willing to pay high prices for houses, office space and other facilities they need for their operations.

Secondly, there are very few goods produced locally, everything is imported. This is putting pressure on availability in the market. The situation will change as we increase agricultural activities and production, and a better and more efficient distribution network is set-up to bring agricultural goods from the interior of the country to the big markets like Luanda. This will lead to a decrease in the importation of foodstuffs from countries such as South Africa, Portugal and Brazil.