Economic literature suggests that trade, and intra-regional trade in particular, plays an important role in promoting economic growth and development. This is on account of the fact that aside from fostering large-scale capital investments and enhancing economic efficiency, intra-regional trade provides a useful platform for improving competitiveness of national enterprises before exposing them to the rigours of global competition. 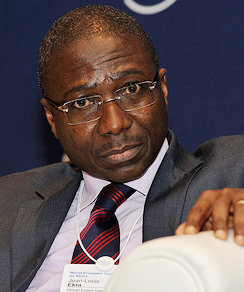 Against this backdrop, the last three to four decades witnessed a significant growth in the formation of regional and sub-regional economic groupings for the principal objective of promoting trade at the regional and sub-regional levels. In this regard, as at the end of 2008, intra-regional trade as a percentage of total trade stood at: 70% in the European Union; 32% in North America; 47% in developing Asia; 27% within Latin America and the Caribbean; and 10% in Africa.

Principal among the barriers are poor transportation networks; cumbersome import and export procedures and border crossing problems; limited use of information and communication technology (ICT); limited involvement of the private sector in the design of programmes intended to raise intra-regional trade; and poor trade settlement systems and financial encumbrances, among others.

A recent study by the United Nations Economic Commission for Africa (ECA) revealed that transport costs in Africa are among the highest in the world.

In landlocked African countries, for example, transport costs average about 14% of the value of exports compared to 8.6% for all developing countries.

The causes of the high transport costs have been attributed to inadequate road and rail infrastructure, limited direct sea links and inefficient commercial transport operating systems. The problem is compounded by delays at border checkpoints.

Cumbersome border-crossing procedures and delays add to the overall costs of intra-African trade. Further, customs systems in Africa are fraught with excessive documentary requirements, outdated and often conflicting customs policies and procedures, limited use of automated customs clearance systems, and limited cooperation among customs and other government agencies responsible for regulating cross-border trade.

Another major non-tariff obstacle to intra-African trade is inadequate ICT infrastructure across Africa.

Records show that Africa lags behind in the use of modern information technology infrastructure which is becoming an increasingly effective tool in the promotion of international trade. Telecommunications services are inadequate, inefficient and very expensive. There is limited availability of mobile phones; and Africa also has the lowest usage of internet, a facility that provides enormous cost-saving benefits to businesses. For example, concerning telephone mainlines, an important tool for trade, in 2007:

Many African banks are also unable to support intra-regional trade as a result of weak capital base, limited knowledge and experience in managing African counter-party risks, and limited correspondent banking relationships amongst them.

Further, the multiplicity of currencies and cumbersome exchange rate arrangements that exist in Africa also add to the cost of doing intra-African trade business. Many currencies in Africa are not convertible and as a result, payment obligations have to be settled in either dollars, euros or other preferred international currencies.

Given the very limited correspondent banking relationships amongst African banks, intra-African trade payments pose enormous challenges to traders, with the payment for most intra-African trade deals routed through financial capitals in the West. The absence of correspondent banking relationships means successive transfer of funds and high intermediation costs. It has also been observed that availability of international finance in support of intra-African trade is also limited due to the fact that most international banks prefer to finance north-south trade rather than south-south trade.

Moreover, stringent lending conditions and high interest charges tend to limit the access of African traders to domestic credit needed to facilitate intra-regional trade. There is very little use of Let­ters of Credit with most small-and-medium sized intra-African trade deals done on “advance payment” or “cash-and-carry” basis. This situation arises from the fact that most African exporters have very limited or no information about the creditworthiness of their African buyers and therefore cannot afford to take their direct payment risks. As a result of the above financing and payment constraints, many good transactions that could have contributed to raising the level of intra-African trade are abandoned.

Other obstacles in the way of intra-African trade are lack of competitiveness of many African products as a result of some of the constraints mentioned above; limited market knowledge amongst participants; lim­ited human resource capacity to identify and utilise new trade opportunities available in the continent; and the absence of credible national export strategies, among others. Besides, in many situations, policy initiatives intended to boost intra-regional trade are designed and implemented (by politicians) without any input or direct involvement of private sector agencies who are actually expected to spearhead the desired expansion in intra-African trade.

I wish to point out that these and other obstacles to intra-regional trade could be overcome through collaboration between the public and private sectors. In this regard, the private sector could partner with relevant public sector agencies to work toward simplifying trade policies; pursuing a broad-based liberalisation of intra-regional trade; investing in trade supporting infrastructure, such as roads, rail, telecommunications, etc through public-private partnerships; and supporting the dissemination of information on intra-African trade opportunities on a wider scale within the continent.

Jean-Louis Ekra is the president of Afreximbank. The article is an edited version of a speech delivered at the Afreximbank/WAMI seminar on: “Obstacles to intra-regional trade in West Africa – the challenge of non-tariff barriers and poor trade settlement system”