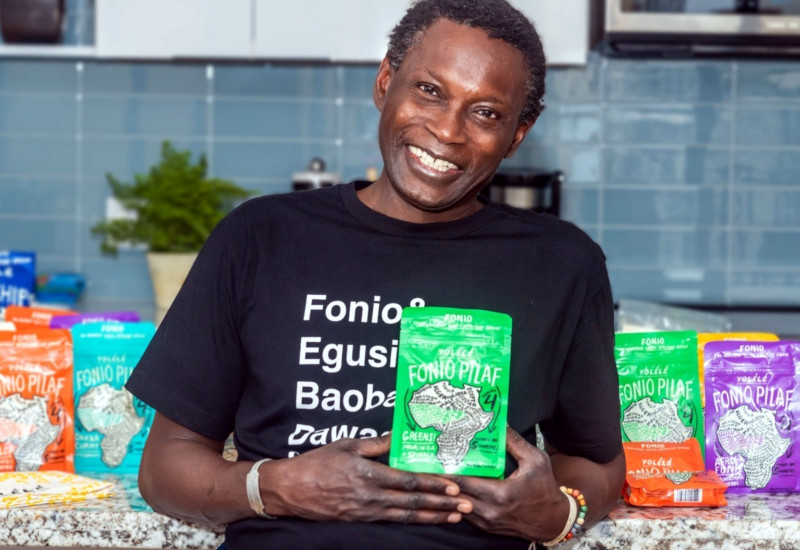 Pierre Thiam, founder of Yolélé, with some of the company’s fonio products.

Here is a selection of businesses, both small and established, that are taking advantage of opportunities in West Africa’s agribusiness and food industry, from ginger and coconut to dried fruit and catfish.

1. Company bets on surging demand for West African ancient grain fonio in US market Fonio – a gluten-free grain with many nutritional benefits – has been cultivated as a subsistence crop in West Africa for thousands of years. It is drought-resistant, can grow without the support of fertiliser and restores organic matter in fallow soil. US-based African-food company Yolélé is tapping into rising demand for fonio. Its fonio products are currently available at over 2,000 grocery stores in the US, including Whole Foods and Target.

“I started ReelFruit nine years ago and worked towards this funding round for the past five years,” says founder Affiong Williams. “At times, I was spending three to four full days a week focused on fundraising for months at a time, supported by a full-time team. Just building the data room (all of the necessary financial, operational, and other data investors need for their due diligence) took months of work. This all has to be balanced with keeping the day-to-day operations going. I’ve seen a number of entrepreneurs having to retreat from fundraising because they are spending too much time away from running the business.

“That said, I am glad we fundraised when we did. If we had raised money in the first year or two we would have likely misallocated the funds and wouldn’t be a company today. We have a much better understanding of the business now.” Read the full article

3. Entrepreneur sets up dried catfish business in Nigeria Femi Eniola returned to Nigeria from abroad and in 2018 set up Osky Catfish Hatchery Grow-out & Processing Facility, a business that grows and dries catfish for domestic consumption and international export.

“If you do the business right, catfish farming can be a very lucrative business. A lot of what you need can be found naturally in Nigeria, which means it has lower capital requirements compared to most other agriculture and manufacturing businesses. And because catfish can be ready to harvest in just a few weeks, it has a much quicker turnover. If you don’t cut corners, you can get your initial investment back in a matter of months,” Eniola explains. Read the full article

4. Ghanaian coconut company exports throughout the world When a rabbi boarded a plane from Israel to Ghana in 2016, it was a journey that would change the fortunes of an entrepreneur who had set his sights on creating a coconut products company. At the time, Michael Annan-Forson, CEO of Melach Coconut Processing Farm, had advertised coconut oil that was made in his kitchen on the networking website LinkedIn.

A businessman in Jerusalem reached out to the Ghanaian entrepreneur, requesting a sample. Impressed with the quality of the oil, he asked Annan-Forson if he could manufacture six tonnes and send it to Israel. He was able to complete the order in only seven days, processing the coconuts quicker than expected. The rabbi was sent to Kumasi to certify if the oil met the kosher standards of the Jewish religion.

Since Melach’s first sale, the company has expanded to become one of Africa’s foremost exporters of coconut products, including oil, water, porridge, charcoal, potash and sugar. Read the full article

5. Senegal: Entrepreneur commercialises milk from semi-nomadic herders In 2004, Bagoré Bathily returned to Senegal from Belgium, where he completed a veterinary medicine degree, to work with Fulani herders near the northern city of Richard Toll, where the Senegal River supports grazing land for some of the country’s three million cows.

The herders knew all the water spots across the landscape and every kind of nutritious herb for cattle, but they had no market for the milk they produced and threw much of it away as they focused on meat production. Bathily realised that if he could capture the milk drawn from thousands of cows and get it to a factory to make dairy products, he’d be in business. Despite any prior manufacturing experience, Bathily founded La Laiterie du Berger (LDB), a dairy-processing company, which has since become a pioneer in the re-establishment of Senegal’s local dairy industry. Read the full article

6. Company sells homegrown shea butter to Unilever and L’Occitane While working in the essential oils industry during the early 2000s in Ghana, Raphael Gonzalez, co-founder and managing director of Savannah Fruits Company, noticed a growing demand for shea butter in Europe. Today the company sells shea butter to big European cosmetics producers like French label L’Occitane and British conglomerate Unilever, as well as exporting to South America, the US, Asia and South Africa. Gonzalez says demand for shea butter is still growing as it is increasingly used in beauty and food products. Read the full article

7. Businessman sees big potential in ginger from Nigeria “Almost every state in Nigeria has its own crop of comparative advantage. In Kaduna, one of the areas where I worked, they specialise in ginger,” says Kenneth Obiajulu, co-founder and chief executive officer of Agricorp. “I found that although Nigeria produces a huge amount of ginger – by some accounts 16% of global production – export revenues are comparatively weak. A lot of this is due to inefficiencies in the system, such as wastage or expiration, and produce disappearing into informal, unrecorded channels.

“We built Agricorp to address these inefficiencies. For example, we dry the ginger so it can be stored for over two years, and provide support and training for smallholder farmers to increase their yields. Nigerian ginger is known for being particularly potent and high in oleoresin, which is good for use in both food and certain pharmaceuticals. The demand for Nigerian ginger is about twice what is currently being produced so there is a lot of room for further growth,” he adds. Read the full article

8. Exporting cashew nuts from West Africa to Europe Salma Seetaroo is the CEO and co-founder of Cashew Coast, a cashew nut processor and exporter in Côte d’Ivoire. “Cashew Coast buys raw cashews from individual farmers in Côte d’Ivoire, then we process the raw nuts into the edible kernels at our factory, before exporting them wholesale, mainly to Europe. The major competitive advantage for West African processors is that we are located three weeks by ship away from Europe and therefore offer fresher products, compared to the roughly four months it would take if the cashews had to be shipped to Vietnam for processing,” Seetaroo says. Read the full article