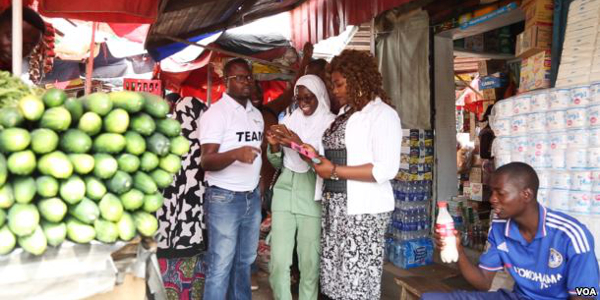 Tech entrepreneur, Tomi Ayorinde of MobileForms, and three of his colleagues visit a market in the Nigerian capital of Abuja to poll vendors on the price of their goods.

Tomi Ayorinde and three of his colleagues trek through a boisterous open area food market in the Nigerian capital of Abuja. Heads turn as they walk in between wooden stalls piled with meat and baskets full of leafy vegetables.

Ayorinde and his team wear white collared shirts with the words MobileForm Team on the front. They’re collecting data on the prices of tomatoes, fish, cooking oil and fresh cow meat. Every once in a while, they stop to talk to a vendor to ask about the cost of their goods.

The prices are entered as data and digitally compiled on mobile phones before they are analysed.

“We’re trying to solve two problems. No reliable data in Nigeria for businesses to make plans, yet we have unemployed youth who are viable people who want to work,” says Ayorinde. “But people have smartphones. So we realised if we adopt a mobile phone strategy to gather reliable data, we can solve this problem once and for all.”

Ayorinde, a 30-year-old IT developer, is the co-founder of MobileForms. He conceived the business idea last year and employs young people to go into the field to conduct polls and surveys. He’s part of a budding generation of young Nigerians who are establishing tech-driven companies; but, running a company these days comes with many challenges.

Nigeria is facing its worst recession in two decades. Inflation began rising in the first quarter of 2016. Now, it has reached 18%. The local currency has been devalued. The economy is still shrinking. Start-up companies are feeling the squeeze.

“Naturally in Nigeria it takes a while to get businesses to spend because they have to go through several approval levels. In a recession they increase their approval levels and that means that a deal you could have closed in a month, it takes you three months to close it, yet you have running expenses,” Ayorinde says. He started MobileForms in September when the recession had already begun taking a toll on businesses. He says it was probably a crazy idea to start when he did.

Economists say start-up companies could help lift Nigeria out of its economic plight even though the current business environment is discouraging.

“Commercial banks will be charging up to 25% to 30% on the average. That’s what they will be charging people that want to go into business,” said Paul Alaje, the lead economist at the Abuja-based, SPM Professional Associates LTD. “We should make no mistakes about it; this recession is really bad.”

Even so, some start-ups have found ways to profit from the recession. PayConnect is one of them. It was established last year when the economy began to slow down.

“As more and more people don’t have enough money, they’ll definitely look for other alternatives and PayConnect happened to be that alternative. So the recession boosted our business, the type of business we’re doing,” Jibro says.

Professional mentorship is crucial in a business landscape like Abuja, where many young people look toward the security of a government job, rather than risk starting a business.

Ventures Platform is one of the few resources for the city’s tech-driven start-up owners. The incubator hub provides internet and workspaces in a slick, modern space.

Ventures Platform helped a team of young Nigerians to develop WeSabi. It’s a service that connects users to a pool of reliable handymen and artisans. Users visit the WeSabi website to find a trade labourer, perhaps a carpenter or a plumber.

The WeSabi team is still learning how to navigate the recession. No one knows how long the recession will continue.

That’s why the Ventures Platform founder, Kola Aina, is advising the government to give tax incentives to start-ups. He says he knows many companies have already collapsed within the past few months, but he’s optimistic. Research shows that the IT sector tends to perform better than other industries during recession periods.

Back out in the market, Ayorinde talks to the chairman of a butchers collective trying to learn more about how meat is priced. Ayorinde has paid a huge price for operating a business during a recession; yet, he believes the service he is providing is priceless and hopes his business will survive. – VOA