The world’s largest online distributor of Nollywood movies and African music, iROKO Partners, has entered South Africa with the opening of a new office in Johannesburg to increase its African presence. The company was founded in Nigeria by Jason Njoku in 2010 and already has offices in Lagos, New York and London. Since its inception, iROKO Partners has grown to over six million unique users that utilise their music service, iROKING, and online Nollywood movie streaming platform, iROKOtv. 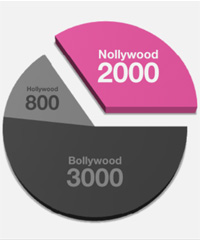 Nollywood is the world’s second largest film industry in terms of output, producing about 2,000 films per year.

Genevieve Dumorné, who heads up the iROKO Partners’ Johannesburg office, told How we made it in Africa about the company’s plans in South Africa.

What is the strategy behind opening iROKO’s second African office in Johannesburg?

Entertainment is a people business – we need to be doing business face-to-face, every single day, so that’s why we felt we needed a permanent base in South Africa. We also know that the big advertising and media agencies are here, and it’s important for us to grow strong working relationships with them. We have awesome platforms and they have brands that want to access our viewers – we need to get talking!

What does the South African market have to offer iROKO Partners?

South Africa is a mature market for both the tech and entertainment scenes so we need to be there. It’s that simple. We have two incredible platforms, iROKOtv and iROKING, that have revolutionised how the African diaspora accesses home-grown entertainment, be it movies or music. In 2013, we want to build our consumer base across the continent and that starts with one of the bigger African economies, which is South Africa.

What similarities and differences have been noticed between the audiences in South Africa and Nigeria?

South Africans and Nigerians are the same in that those that watch [Nollywood movies] are fanatics about it. We have over 5,000 movies for that reason. I assumed it was Nigerians in South Africa that were watching it, but we looked at our numbers, it’s mainly South Africans. Clearly South Africans are unique in their cultures, but I think that Nollywood is a common denominator. The story lines are highly relatable.

Tell us about the decision to partner with a South African company GoMetro?

The mobi site we built for GoMetro was our first partnership with a South African company. They had a new mobile site for up-to-date travel information and they wanted to enhance this with an entertainment feature. We know that once people are commuting and have travel info to-hand, their next step is to read or listen to music. So we decided to make iROKING accessible through the site, allowing daily commuters using the site instant free download access to the thousands of songs we have on the site. It was really well received and a fantastic first foray into working with a South African partner.

Are there any other partnership plans?

There are always plans in the pipeline – we move quickly and work with the best. But I have to keep future plans and partnerships under wraps until they launch.

Are there any other African markets that are being considered for expansion? If so, which ones and why?

We’re looking to East Africa as a future location for further iROKO expansion. But for the moment, we’re totally focused on cultivating the South African team and building an advertiser and tech partner base.