Nigerian cinema company Cinemart is looking to revive the big screen in Africa. According to a statement, Cinemart plans to open 25 cinemas in Kenya over the next 12 months. 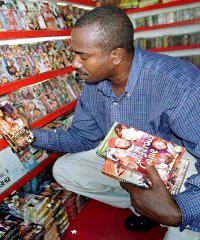 Movie piracy and the popularity of home entertainment are serious threats to Africa's cinema industry.

It was this month announced that Silverbird, previously the largest cinema company in Kenya, has put its last remaining theatre up for auction. According to a Daily Nation report, it appears that the demise of the business was due to management problems, rather than poor attendance numbers. The Silverbird Group also owns cinemas in Nigeria and Ghana. The Daily Nation reports that Kenya’s Fox Theatres recently also closed three cinemas due to weak patronage and high costs.

Africa’s cinema industry is struggling because of illegal movie pirating and the rising popularity of home entertainment.

Cinemart’s Dayo Ogunyemi said his company will introduce a different business model and rejuvenate the industry.

Ogunyemi noted that Africa’s cinema industry is suffering from a lack of innovation. “The mainstream cinema model in Africa has largely consisted of transplanting an American formula of Hollywood movies at New York prices to the affluent, who make up a very tiny slice of the population.”

“This model has simply not been able to scale-up successfully even in relatively affluent South Africa and has struggled as a niche offering in Kenya, Nigeria and Ghana,” he added.

According to an article by StarAfrica.com, some of Cinemart’s facilities in Nigeria are basic rectangular boxes with plastic chairs or benches. Because of the high cost of air conditioning, cooling is provided by fans. Ogunyemi said that these cinemas have screens of 20 feet or bigger, with good sound. The idea is to upgrade these facilities when they start to become successful. “Once we’re regularly getting a certain percentage, we can put in more comfortable seating and air conditioning. So it’s start basic and upgrade,” Ogunyemi explained.

This is, however, not necessarily the type of theatres Cinemart will establish elsewhere on the continent. Ogunyemi said that the company is looking to build 400 seat cinemas and multiplexes with four to six screens.

“It’s the equivalent of having only 50 petrol stations in the whole of Kenya to meet the energy needs of 40 million citizens,” commented Ogunyemi.

He said that the rapid rise of the mobile phone industry in Kenya is proof that customers have the purchasing power to support value propositions beyond the basic necessities of food and housing.