MSCI have announced they are considering removing Nigeria from the MSCI Frontier Markets Index given restrictions on currency trading and the resulting deterioration of FX liquidity impacting investors’ ability to repatriate capital. This is a risk we’ve been highlighting for the last six months or so (see below) so shouldn’t come as a complete surprise, and JPMorgan and Barclays have already removed Nigeria from their respective local currency emerging market bond indices.

MSCI plans to announce its decision on or before 29 April – and in the meantime is seeking feedback from investors.

In Malaysia and Ukraine, MSCI did take action:

In Egypt and Greece, MSCI took no action:

The Malaysia and Ukraine examples suggest that broad, formalised capital controls can lead to markets being removed from the MSCI Frontier Markets Index. However, this need not be the case in the case of temporary capital restrictions (taking the example of Egypt in 2013, or Greece in 2015). MSCI’s methodology simply states that an MSCI Frontier Markets Index member must have “at least partial” ease of capital inflows/outflows. It is possible that MSCI could consider Nigeria’s restrictions as temporary, particularly if the country elaborates an effective Egyptian style queue mechanism or system to guarantee foreign investors ability to repatriate. The risk is that with severe energy shortages right now, the Nigerian authorities may have other, more pressing issues to deal with.

Frontier equity investors tell us that they are much more index agnostic than their emerging market peers – and frontier funds allocations typically differ significantly from the index (including off index allocations). However the fact is that investors who are currently underweight Nigeria would find themselves overweight if Nigeria was to be removed from the index.

US$480m of MSCI benchmarked money in Nigeria. The latest data tells us that the asset-weighted aggregate MSCI Frontier Markets benchmarked fund is currently underweight Nigeria (6.5% allocation versus 12.3% index weight using end-February data, the latest available); if they were to sell their entire remaining holdings in Nigeria, this would account for $410m of foreign equity selling. Global frontier equity ETFs are still tiny, with just $570m of passive money benchmarked to MSCI, of which only $70m is in Nigeria. So, a potential of $480m to be sold, but given the illiquidity of naira foreign exchange markets, it is unlikely that this amount could be sold. 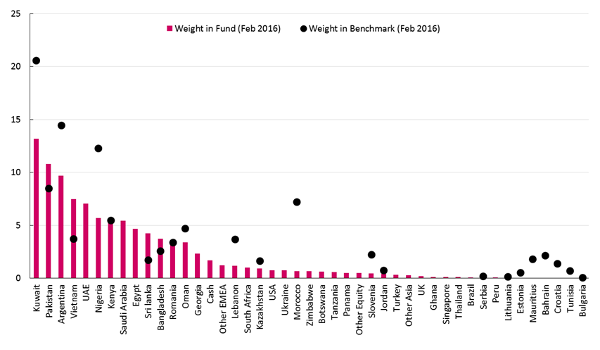 At the end of the day, in frontier markets, indices matter less. But a clearing exchange rate and ability to repatriate is vitally important, and equity investors (and bond market investors) will be unlikely to return to Nigeria in to a currency which is still vulnerable to weakening, and where the main policy option available to avoid weakening the currency is capital restrictions. This is particularly the case when emerging and frontier funds alike have been experiencing redemptions and may be required to return dollars to fund holders.

Daniel Salter is the head of equity strategy at Renaissance Capital.