With feeds from the Cable News Network (CNN) and Reuters to supplement its coverage of Nigerian local and national news, the Lagos-based outlet hopes to compete with other satellite stations that serve the African continent but which cannot match NN24’s African perspective on the news. 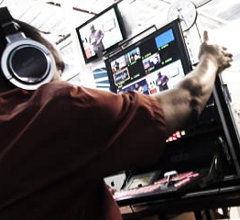 According to the broadcaster’s website, “NETWORKNEWS24 Limited is a next generation Nigerian media company that aims to bring high quality television news content to Nigerians and the world. NN24 has created an international network consisting of seasoned professional reporters bringing local news from all regions of Nigeria and international news from around the globe. With a strong affiliate partnership with CNN International, primary distribution platform DStv, a news content deal with Reuters and a multi-year advertising deal with Mediacom, NN24 aspires to be the leader in the Nigerian media industry for concise and reliable television news, twenty-four hours a day, seven days a week.”

Technical enthusiast Oluniyi David Ajao, who recently monitored NN24’s earliest trial telecasts, publishes a personal internet blog on technology and the role it plays in African development. He says the network, though not a dramatic innovation for Africans, shows promise for reaching new viewers.

“It’s not exactly novel because there have been a few 24-hour TV satellite stations. So, this is not exactly new in Africa. It might be a bit new in Nigeria,” he suggested.

The key appeal of a Nigeria-based flagship lies in the unique African perspective it offers viewers, says Ajao.

“The news channels that dominate right now are all from outside Africa – BBC, Aljazeera, CNN, Voice of America (VOA) – and all these people have their interests and biases. So, when it’s a Nigerian or an African thing, we expect that the perspective will be different. Maybe it will be more objective,” he reflected.

With its overarching world focus, NN24 is also expected to rise above state and federal government-controlled Nigerian broadcasters. But, it will have its hands full of competition from the internet, mobile phones, and other modern means of technology which are helping today’s Africans receive their news.

“TV stations, radio stations, the newspapers are all publishing their news on their websites, so the internet culture is gaining ground quickly. And, some of these websites have mobile versions, so people are able to access the contents on their mobile phones,” he pointed out.

Despite these breakthroughs, Oluniyi Ajao sees a continuing important role for television news outlets like NN24.

“Internet can never take over from TV. TV always has its place. For example, the recent debate in the U.K., where those three candidates want to be prime minister when they appeared on TV. It was different. It gave us more than we could ever get from reading online. So watching TV still has its place. So, NN24 still will have its place no matter how ubiquitous the internet becomes,”he said.

Another handicap that satellite operators hope to overcome is the cost factor. Ajao indicates that many Africans have a long way to go before they can afford to buy televisions or satellite dishes.

“For now, practically speaking, radio is still the leading medium of reaching a broad number of people because not everybody is wealthy enough to afford a TV, or blessed to be able to afford a satellite dish. And, NN24 is broadcasting on a service called DSTV. DSTV is like the premium digital satellite service. So, not everybody will be able to access it for now,” Ajao maintained.
Nonetheless, the technology blogger contends that by maintaining high professional standards and gearing broadcasts to a news-hungry audience, NN24 stands a better than even chance of winning over viewers and gaining a healthy share of the market

“The level of excellence I saw in their broadcasts, it appears they have something to offer. They have a good plan, a good strategy to take over the market, so if they can gain enough ground, they have a good chance of surviving. Aljazeera for example, they started a few years ago, and today, they are almost indispensable. They are watched widely in Nigeria, so NN24 has a chance, figuring they have a different angle. They are African. They are professional. They are trying to be world class,” he said.

As far as advertising is concerned, Ajao says the Nigerian market in Africa’s most populous country is diverse and deep enough for a satellite station like NN24 not to be concerned about sustaining revenues to pursue its operations and stay on the air.  – VOA