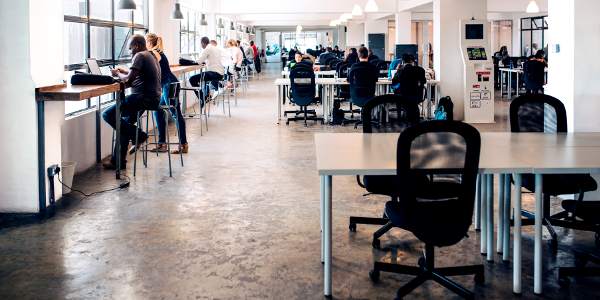 However, the path to building the entrepreneurship hub has not been easy. Nairobi Garage director, Hannah Clifford, says that the journey has been filled with trial and error, with many lessons learned along the way.

Launched in 2012, Nairobi Garage began in a 9,000 square-foot space in Ngong Road. It began as a simple concept. It housed 130 desks for freelancers and start-ups, and placed an emphasis on low prices and flexibility.

“Initially the idea was pretty simple – we thought we would get a good office space, supply stable infrastructure, and people would come,” says Clifford.

“We almost undervalued work spaces in a bid to tempt individuals and companies away from the established office blocks – or cafes with WiFi – that they were used to working in. We were introducing a new concept, after all, so we knew we needed to be attractive.”

Customers – mostly young entrepreneurs in their 20s and 30s – began to trickle in. But Clifford says that the team was taken aback by the numerous challenges they faced in the beginning.

Managing relationships and agreements with often “volatile” building owners and managers proved more difficult than expected; while clients began to cause problems too, for example by disappearing from the space without making payment, or abusing office infrastructure.

On the supply side, as the number of co-workers increased, ensuring consistent high-speed internet became more challenging – especially when teamed with frequent power outages.

“We are acutely aware that our customers rely on us, and it is our job to ensure the suppliers we use are reliable. At the start we had trouble, as certain suppliers did not meet their end of the bargain, frustrating us, and ultimately our customers,” Clifford says.

Clifford and her team at Nairobi Garage had to act quickly to overcome these challenges if the co-working space was to flourish. Clifford says she soon learned that having the right people was key to ensuring the space’s survival.

She focused on hiring a team of people who would be efficient and capable of thinking creatively about how to move the space forward. Incidentally, the expanded crew of Nairobi Garage was 95% female – making it one of Africa’s first female-run co-working spaces.

With a team in place, Nairobi Garage approached the suppliers. Today, free internet services are being provided by SEACOM and Liquid Telecom; while Microsoft and Google came on board to help with training sessions and technical support for Garage members.

The company then implemented membership criteria for the space, as well as introducing a selection process for new co-workers.

“We have deliberately chosen to host modern businesses that are involved in innovation that aids in sustainable livelihoods,” Clifford says.

“While all our member companies are at different stages of development and growth, and operate in different sectors, we look for people willing to share knowledge and experience. We encourage our members to learn from each other to accelerate their growth,” she says.

“Sometimes it doesn’t work out, and we have learned to know when to say goodbye when the fit is not right. Luckily, this hasn’t been frequent.”

As the “personality” of the organisation developed, says Clifford, Nairobi Garage began to see a need to offer further support services and opportunities for members. The Garage started organising networking events for members, as well as hosting weekly events focusing on various aspects of entrepreneurship and business development.

Members now have access to an app that provides news, and stories and advice from entrepreneurs, as well as listing opportunities and events in the area.

Within two years of launching, says Clifford, Nairobi Garage had broken even, and within three years, it was ready to expand to a second office space in another of Nairobi’s key commercial districts, Westlands. The Westlands space measures 17,000 square feet, adding a further 300 desks to Nairobi Garage’s capacity.

Today, the Garage houses 80 start-up companies – comprising over 500 people – including Uber, local start-ups such as financial services provider Umati Capital, and “lone wolves developing the next big innovation”. Average prices are US$20 per day, or $150 per month.

Clifford plans to expand the Nairobi spaces by a further 10,000 square feet before the end of the year; while over the coming weeks, subsidised “professional services offerings” will also be launched to members, through partnerships with local companies.

“We believe we have found the recipe for co-working success, and we hope to welcome many more members to our Nairobi spaces, as well as expanding our footprint in other African markets,” she says.