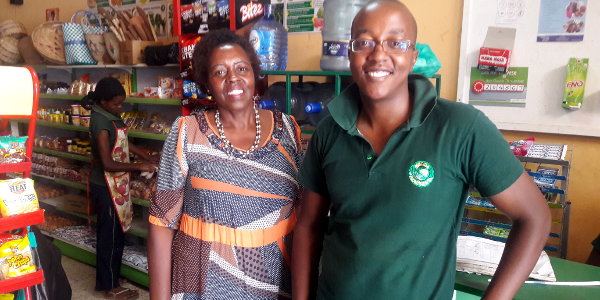 Lucy and Jeremy Karingithi, the mother-son duo behind Mboga Masters

Mboga Masters was founded two-and-a-half years ago by Jeremy’s mother, Lucy Karingithi. He joined the business shortly afterwards, upon completing his MBA at a British university. The retailer stocks fresh vegetables and fruits, dry foodstuffs, and operates an in-house kitchen that serves meals.

“Some of these towns are becoming middle and upper class, but the businesses that serve those places are informal and not up to par with the tastes and expectations of the new consumers,” says Jeremy. “So people moved to Syokimau to find some of the facilities they are used to is not yet available.”

Syokimau is located south of Nairobi, past the Jomo Kenyatta International Airport. Although it is not technically part of Nairobi, a large percentage of the local residents work in the capital. In 2012, a train station opened in Syokimau – the first in Kenya in 80 years – reducing travel time to Nairobi city centre by half. More than 45,000 commuters reportedly used the train service in January 2015.

“There is a big need to bring business to a higher level in these satellite towns. Most of our clientele are families where the parents have white-collar jobs. They don’t have time to go to informal markets. They want somewhere they can drive to, park their car, and walk into a shop that stocks all the produce they need. They are modern people so they don’t want to haggle in a dirty market, and the ladies don’t want to mess up their nails,” notes Jeremy.

“But there are still few options in regards to convenience shopping compared to what a middle class household living in a Nairobi suburb would have access to,” says Jeremy.

Mboga Masters is developing a new store that is set to open in August. The company also operates an online shop that has appealed to consumers even in Nairobi suburbs. It has contracted a logistics company that makes deliveries on its behalf.

“With the new store we are focusing on food only. We don’t want to open a supermarket that stocks everything. We want to stock dry foods, fruits and vegetables, have an in-store restaurant, and add two new food lines that we can’t disclose now,” says Jeremy.

“We want to build a new concept that we can replicate in other satellite towns, but also within Nairobi, and be able to exist in the same environment with supermarkets. Syokimau is a good testing ground for us because it is not a unique place. There are many other places across the country that have similar characteristics and customer profiles.”

His mother Lucy notes a key selling point for Mboga Masters is its wide variety of fresh produce. There is a shift in eating habits, particularly in urban centres and among high-income consumers. A few years ago, for instance, traditional foods were considered to be a preserve for the poor.

“But we are seeing some changes in buying habits. Many of our consumers now want to eat these foods because they are becoming more health conscious. We are seeing the trend even among our young consumers going for more agricultural produce and shunning processed alternatives,” says Lucy. “This is why the idea of formal fresh produce retail is doing well because these customers don’t want to hassle to source produce such as stem tubers and traditional African vegetables.”

Part of the fresh produce stocked at Mboga Masters is sourced from Lucy’s farm, situated on the outskirts of Syokimau. As it expands, one of the challenges the business will face is ensuring consistent supply of produce. Some consumers are also demanding organic produce.

“Customers want to know that the produce they are buying is healthy and without toxins. Some consumers have ailments, such as diabetes and lupus, and have even more strict eating patterns. So we really have to go out of our way to ensure we have what they need every day, and that it is of the right quality,” Lucy explains. “Initially it was very hard, but as we have grown we now buy in bulk so we are increasingly attracting quality producers.”

Accessing talent is another challenge for Mboga Masters. “My previous work experience was with multinationals where there is a lot of order, structures and investment in top quality. So when I joined the business, the biggest challenge was just ensuring we are attracting good talent, training people, and getting them to think about career growth – not just doing the same thing every day,” says Jeremy.

The mother-son duo says they have managed to build an amicable working relationship – leveraging Lucy’s experience in agribusiness, and Jeremy’s business school training and international exposure.

“She is very quick at trying things while I take a longer time to turn around because I first want to see facts and numbers. We have reached a good balance because I know even though I bring science, she brings gut feeling and valuable experience,” notes Jeremy.

“There are a lot of concepts from my MBA that I’ve thrown out of the window based on my experience here. But there are some things, such as the exposure and working with systems, that have been very beneficial to the business.”