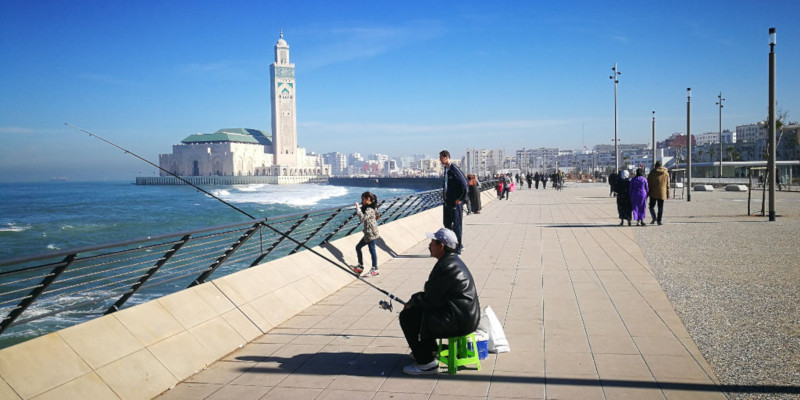 How I miss Morocco, my home country! Last time I was there was in May 2019, when I paid a visit to a couple of Moroccan listed companies after a business trip to Europe and, of course, to see my family briefly.

This June, my husband and I, with our two small children, had a whole holiday planned to go there and visit some of the beautiful and colourful ancient cities. Part of the reason for the trip was for our children to get to hear and speak my home languages, Arabic and French. But, as we all know, Covid-19 swept around the world and all borders were closed. Morocco was one of the countries that went into lockdown, which started on the 20th of March 2020.

Obviously, with all movement restricted, many Moroccans lost their jobs and the economy went into quasi-hibernation. In a report published by the Haut Commissariat au Plan (the statistics body in Morocco), in collaboration with the United Nations and the World Bank, gross domestic product (GDP) for the second quarter contracted 14% compared to the same period in 2019. The full-year estimate of this figure is -5.8%, the first recession in more than two decades. This recession is a result of the combined impact of the drought and the pandemic.

Morocco was late to the pandemic party. In fact, Morocco is experiencing its first wave when other countries are experiencing the second. It seems that the lockdown that was enforced in March performed its role of flattening the curve. But when the government lifted the lockdown, the resultant full impact prompted a second lockdown.

In June, as the summer season started, the government lifted the lockdown and opened the borders but the resurgence of the virus, in what is called the second wave, forced some areas back into restrictions. One such area is Casablanca, where my parents live, the beating heart of the Moroccan economy.

The tourism industry also took a beating between strict lockdown measures within the country and border closure. The sector is one of the strongest drivers of the economy, with a contribution of about 7% to GDP (a note from the tourism minister in L’Economiste). In another note published by the Ministry of Finance in September, new arrivals declined 64% by the end of June 2020.

The Moroccan stock market was no exception to the rest of the world, with the All Share Index (MASI) falling to its lowest level in five years. The index lost 25% between March and April.

We have just finished a round of conference call meetings with a number of Moroccan listed companies.

Many listed companies reported losses or a large drop in their earnings for the first half of the year. Most of these had to take provisions to hedge against a weak economic backdrop, coupled with donations to the special Covid-19 fund that was launched by the king to help the most affected industries.

The index recovered since then, but the market is still one of the most highly rated of our universe with a P/E multiple of 19x and the companies showing little growth to none.

The two reasons for such high multiples are the low cost of capital with a policy rate of 1.5% and the low exposure of institutional investors to offshore assets. Local investors tend to invest onshore, resulting in what seems like “bubble” valuations relative to similar markets in emerging and frontier countries.

Having said that, the Moroccan market can present opportunities from time to time. This was the case in 2016 when we bought Label Vie. This is one of the largest modern retail companies in Morocco with just over a hundred stores around the kingdom. Modern retail is in its infancy representing only 15% of total retail in Morocco.

Label Vie is one of the few winners from the health crisis. During the first quarter, the company’s sales went up 26% due to stockpiling but has come back to a more normal growth level since (over the last five years, revenue growth has averaged 11%). The margins have improved over the same period. The company’s management is guiding towards an even larger expansion in the margins, thanks to the conversion of some stores in the portfolio to premium ones and scale benefits from the opening of four new stores by the end of 2020.

The stock has rerated from a P/E of 12x, when we bought, to 23x now but we still hold it, as the sector’s potential and the company’s growth profile as well as the lack of new opportunities in the market justify the high multiple.

The lockdown coincided with the holy months of Chaaban and Ramadan, when people stop drinking alcohol. This is a seasonality that occurs every year for the country’s only brewer Société des Boissons du Maroc. This meant that the 11% drop in the company’s H1 2020 sales is partly explained by this occurrence. The second half of the year should see some improvement with the reopening of restaurants and bars end of June, as well as the resumption of local and international flights.

In our opinion, this improvement will not have a significant impact on the company’s earnings for 2020 but the latter should show signs of recovery from next year, hoping the pandemic will be over, as the holy lunar months move further away from summer as a consequence of a natural move around the solar year. As a result, the holy months now fall more in spring or in early winter, which is not a typical alcohol consumption season in Morocco.

The stock is now trading at a P/E of 16x, below its historic average of 18x, with a dividend yield of 6%.

Morocco’s economy is one of the most mature on the African continent where most listed companies had to look to sub-Saharan countries for expansion and growth. In the past, this created interesting opportunities from an investment point of view and there is no reason why it won’t be the case in the future. Until such opportunities present themselves or there is a new listing on the Casablanca stock exchange, we maintain limited exposure to the country in our strategy.

I really wish the pandemic will start easing soon, so that we can resume our travels and see the companies face to face. And for me, specially, I miss my family and would like my children to have a chance to reconnect with their Moroccan cousins.

This report was originally published by Old Mutual Equities.