The plant, located 30 kilometres north of Swakopmund, will allow Areva to pump enough water for its Trekkopje uranium mine without pumping any water from the soil. 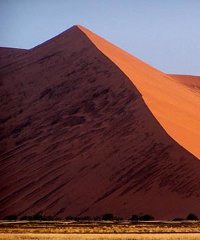 Desalination is the process of removing salt from seawater.

The desalination plant and distribution infrastructure at Wlotzkasbaken forms part of the overall Trekkopje project. The plant will supply sufficient water to support the mining operations in the Erongo region. The water is conveyed to the Trekkopje mine via a 48 kilometres pipeline supported by three pump stations.

The first and second phases of the process entail seawater passing through ultra filtration membranes that remove coarse debris from the water. The process of reverse osmosis separates the seawater into two streams – a “pure” water and a brine stream, which is gravitationally forced back and dispersed into the ocean.

Once completed, the plant will have the capacity to produce 20 million m3 of potable water per annum.

According to the company, excess water will serve local communities and industrial activities.

An Areva press release states that the Trekkopje mine is the largest direct foreign investment ever made in Namibia and a particularly strategic project for the group.

Upon commissioning, the Trekkopje mine is expected to process 100,000 tonnes of crushed ore per day with an expected production of 3,000 tonnes of U3O8 per year.