While ICT in Africa is a blooming industry, internet penetration on the continent was at about 11.5% in 2011. Even with the laying of new submarine cables, the continent lags behind the rest of the world in broadband development and requires innovative solutions to its Africa-specific problems. 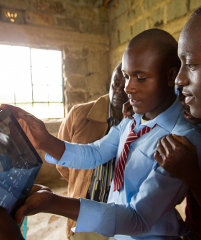 One of the continent’s challenges that needs to be addressed surrounds the issue of providing underserviced rural areas – that are often not even connected to an electrical grid – with internet access.

A solution to this can be seen in a pilot network in Kenya that makes use of solar-powered towers that tap into unlicensed “white space” frequencies. This initiative was launched by Microsoft in February, in partnership with the Kenyan Ministry of Information and Communications; Indigo, a Kenyan internet service provider; and US-based wireless startup, Adaptrum.

Using TV white spaces and solar-powered base stations and towers, the previously unserved locations near Kenya’s Nanyuki and Kalema have been given access to broadband. ‘White spaces’ refers to the unused channels of the wireless spectrum in the frequency bands that are commonly used for television. This is ideal for delivering low-cost broadband access to rural communities as radio signals in the television bands require less base stations for coverage because, unlike other types of radio signals, they travel longer distances and penetrate more obstacles.

“White spaces and efficient spectrum management represent a creative, tested and affordable way of extending broadband access to unserved communities,” said the director of Microsoft’s Technology Policy Group, Paul Garnett, in an emailed statement. “Kenya is one of the countries leading the way in using this innovative solution, and we hope regulators around the world take note and develop legal frameworks that support broader commercial deployment of white space technology in their own jurisdictions.”

This project is part of Microsoft’s 4Afrika Initiative, which aims to help improve the continent’s global competitiveness. According to the Communications Commissions of Kenya, only 2% of Kenyans subscribe to broadband services.

“We believe our work in Kenya serves as strong proof that true commercial deployment of white spaces technology not only makes good business sense, but could have a key role in delivering on the promise of universal access for Africa – significantly reducing barriers to affordable broadband access faced by almost half the world’s population,” stated Louis Otieno, Microsoft’s legal and corporate affairs director for Africa initiatives.

The pilot is the first use of TV white space technology on the continent that targets rural communities that do not have broadband or electricity access. According to Otieno, the project is designed to increase economic opportunities in these underserviced areas.

“The initial installation near Nanyuki, Kenya, brings access to five locations – a healthcare clinic, a primary school, two secondary schools and a community centre,” stated Otieno. “The installation in Kalema, Kenya, will start with a base station and a connection to the Government of Kenya agricultural extension office. In the coming months, the partners will add fourteen additional locations to the network, serving up to 6,000 people.”

Consumer devices such as laptops, tablets and mobile devices are not typically made to connect to access points operating in white space frequencies. So how does this pilot network in Kenya work? Devises, manufactured by Adaptum, receive the white spaces signal and distribute the wireless internet access via the usual 2.4GHz and 5GHz Wi-Fi airwaves.

“Beyond simply providing access, we have given the community a real stake in the pilot’s success by creating a cooperative to manage the project, an effort which included hiring and training a local community member to serve as the lab technician,” said Peter Henderson, chairman of Indigo Telecom.

Microsoft is not the only international company who has employed white space pilot networks in Africa. Last week Google announced the launch of a similar trial in South Africa’s Cape Town area where 10 schools will receive wireless broadband over a white spaces network.

“During the trial, we will attempt to show that broadband can be offered over white spaces without interfering with licensed spectrum holders,” stated Fortune Mgwili-Sibanda, public policy manager for Google South Africa.