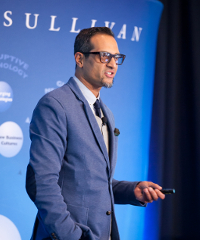 I was a newspaper boy, at age 13, living in west London.

I think several people. In terms of role models, I look up to the hip-hop guys. I look up to people like Jay-Z, Puff Daddy – because these people came from nothing and they created empires. So you know I don’t really follow the Richard Branson mantra, because they are not in my world. I have got to relate to someone who is kind of coming from my world.

3. Which parts of your job keep you awake at night?

Because I can pay the bills [he laughs]. No, I think it’s because Mi-Fone has been able to go for six years now, and that means we do have a business. And I think the fact we keep on getting repeat orders, and the brand is increasing, and my profitability is increasing, means I’m doing something right.

In 10 years time I would like to see myself being able to have the freedom to help many African entrepreneurs. When I say freedom I mean that I have been having a tough time for the last six years trying to raise money. I don’t want to meet someone and they have a brilliant idea but no one is funding them. I want to fund them, and I want to be in the position where I can put US$10m to $20m of my own money into a fund and know that if I lose it I won’t lose sleep because I have another $100m stashed away. But it is about empowering people and giving people a chance, because I think a lot of people don’t get chances.

5. You have lived all over Africa. What are the best things about some of these countries?

I think the whole of Africa is great. I would say my most favourite country in Africa is Nigeria, simply because of the gung-ho attitude, the hustle, the business attitude – you learn so much.

Of course, you can’t beat South Africa for quality of life – the food, the wine, and the people. You would never imagine that this country had such problems 20 years ago. It’s brilliant, and it’s the best place for an entrepreneur to be right now because it is cost effective. My advice for any entrepreneur who is doing African business is to come and set up in South Africa because your cost of operating will be cheap. You see, we make dollars, and when we convert dollars into rand we can now employ good people… If you try and set up an office and staff and all that in Nigeria and Kenya, you are going to have a headache. It’s not cheap.

The attitude of the people. I think Africans have a lot of positive things going for them but I think they are also very laid back, and I think they also have to have a sense of urgency like the Chinese and the Indians, and the Jewish people. There is no sense of urgency in Africa. Everyone just wants to party and everyone is just living for the weekend, but no one is really thinking about tomorrow. If Africans really got their act together, they wouldn’t need China to come here. Africans have got to start owning their own future instead of leasing it out to foreigners and I think if Africa doesn’t wake up, we are going to have problems.

I am just going to keep on building this baby for the next few years. I don’t think I will ever retire. I think that we have the basic foundation of creating a very valuable company.

I don’t really relax. My mind is always working. But look, I like to party. I love music so I’m always in bars, clubs – obviously balanced with family, health and work.

Just don’t daydream. I think vision without action is daydreaming. So if you have a vision, and you don’t execute on it, then you are just daydreaming.

Through people. People have to realise and understand that you have one life to live, and you are on this earth for 50 to 80 years… What Africa is bad at is time management, and I think time is the most precious commodity. That is why we sometimes don’t sleep… I’m very paranoid about time.

It takes 10 years to build a proper business; we are not even there yet. Entrepreneurs are going to have to spend at least three quarters of their day on their craft. Get your craft right. Then the rest of that you can spend with family and all that. An entrepreneur with family… it’s tough. But my advice to a lot of entrepreneurs is if you are going to try do this, make sure you don’t have any [other] commitments.

Alpesh Patel quit his job at Motorola to start his own pan-African mobile phone brand, Mi-Fone, in 2008. The company is headquartered in Port Louis, Mauritius, and manufactures low cost handsets to target low income African earners. Within the first five years, Mi-Fone sold over 1.5m devices in 14 countries across the continent. Patel is also the CEO of the Mi-Group International and OJU Africa which introduced the world’s first African emoticons. “Oju” means “face” in the Yoruba language from Nigeria.

Patel was born in Uganda after his family relocated from India, but moved to the UK during the Idi Amin regime. After completing university, Patel started selling mobile phones to the Chinese and made his first million at the age of 23. Patel later relocated to South Africa, and eventually ended up working for Motorola in Africa, prior to starting Mi-Fone.