Mbinga district is in the coffee-producing region in southwest Tanzania, 1 100 kilometres from Dar es Salaam. It is bordered by Lake Malawi to the west and Mozambique to the south. 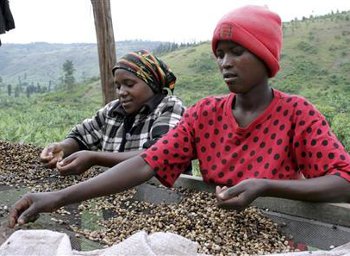 The people of Mbinga District are heavily dependent on the coffee industry.

According to the 2002 census, the population of Mbinga represented a little more than 1% of the country’s population, with a population density of only 18 people per square kilometre. More than 92% of the population lives in rural areas. Most of the roads are unpaved, making it difficult and expensive to travel around this remote area.

Most economic activity is based around seasonal and single crops: in addition to coffee, the conditions in the region are suitable for tobacco and tea, and food crops such as mangoes, maize, sorghum, cassava and potatoes, as well as pyrethrum. There is an extensive artisanal fishing industry along the shore of Lake Malawi.

During the rainy season – the growing season – income tends to be low among farmers. They are often forced to pre-sell their coffee and other cash crops at low prices to earn enough income to meet their basic essential needs. This was exacerbated by a global overproduction of coffee, which saw prices stagnate globally and locally from 2001 with farmers getting lower returns for their crops while contending with ever-increasing production costs.

The Mbinga Co-operative Union (MBICU) was formed in 1989 by the Ministry of Co-operatives to cater for the financial needs of coffee producers in the region. After the Tanzanian government liberalised the domestic coffee market in 1993, the MBICU could not compete with the private coffee buyers and went bankrupt.

Mbinga Community Bank (MCB) opened on 30 July 2003 to fill the void left by the collapse of the MBICU. The bank is licensed by the Central Bank of Tanzania as a Regional Unit bank with its headquarters in Mbinga Township. MCB shareholders comprise individuals, companies, co-operative societies, non-governmental organisations, savings and credit co-operatives, and the Mbinga District Council.

MCB is a fully fledged microfinance bank, offering loans and savings products. As of 30 October 2008, the bank had a total of 7 752 savers out of which 900 were ‘group accounts’, covering a membership of nearly 15 000 people. It also had more than 14 000 loan accounts, which cover microloans to individuals, small business loans, productivity loans, loans provided to solidarity groups, and its overdraft facility (kifuku), which is also used by its farmer clients. The average loan is US$130, and the average savings balance US$160.

Typically, MCB customers are rural smallholder farmers and fishermen, and the artisans and micro retail businesses that serve them, and their families. Being able to deliver a range of products relevant to this diverse client base is the key reason for MCB’s success to date.

One of the most interesting and well received products developed by MCB is the overdraft account, or kifuku, which aims to address the liquidity problems of smallholder farmers in Mbinga during the rainy season.

MCB realised that seasonal income fluctuations were negatively affecting its customers. During agriculturally unproductive months, farmers were in dire need of funds. By pre-selling their cash crops for lower prices, they were risking their future earnings and savings potential.

The bank developed and overdraft service to protect its customers. By signing up for this account, a client can withdraw a fixed amount a month until the harvest season. This product has been well received by clients, and the demand for it is growing. Customers who have access to this product use the monthly funds to meet a variety of obligations, including paying for essentials such as hospital bills and school uniforms for their children.

The overdraft facility allows MCB to actively assist its customers, which in turn is helping its own business to grow. By waiting for better prices, for example, clients have been able to make larger deposits from coffee sales. In the 2006-2007 season, these reached TZS2.2 billion. This in turn has increased the bank’s profit through interest and commissions charged.

Mbinga, as a community bank, knows its customers, and has therefore been able to maintain a relatively low default rate for this poor rural area. The portfolio at risk over 30 days is 5%, which while nowhere near the large microfinance lenders in the country such as PRIDE (0.44%) or Selfina (0.04%), bears comparison with similar institutions like Akiba Commercial Bank (4.9%) or the Small Enterprise Development Agency (3%), and is well ahead of some other microfinance providers like FINCA (19.86%) or Faulu (14.34%).

MCB’s decision to offer tailor-made financial services to its clients has shown dividends. Between 2005 and 2007, the number of borrowers grew from 5 328 to 8712. It continues to reach more and more clients: its total number of borrowers from October 2008 represented an increase of more than 60% in the previous 15 months. The bank reported having a total loan portfolio of US$1 million, as of October 2008, and total deposits of roughly US$1.3 million.

This development model is ensuring a steady increase in customers for MCB. The productivity loans and small-business loans continue to be leaders in MCB’s portfolio. However, all of the products are performing satisfactorily, according to the bank, and all were expected to improve by the end of 2008. The products are generating reasonable income for the bank in terms of interest and commissions charged.

An important lesson that arises from MCB’s experience is the need to do market research. This is essential to put the bank in touch with the problems its clients face, which can then be addressed during the design phase of any new product. MCB also emphasises the importance of IT infrastructure to roll out the products and maximise efficiency.

MCB has overcome a number of fundamental challenges to its growth. One of the most important has been the distances between communities. Mbinga District is vast and mountainous, covering 11 000 square kilometres. The farthest client MCB reaches is about 150 kilometres away from its bank branch. Most of the roads leading to the villages are in poor condition, which means that the journey can take longer than usual, especially during the rainy season. This has made both providing the services by MCB and accessing these services by clients difficult.

This difficulty has been overcome largely by using mobile telecommunications. For example, farmer clients in more remote villages are contacted on mobile phones, and meetings with groups of clients can be pre-arranged. In these meetings, loan applications can be processed and savings balances accessed by individual clients. In some villages, however, there are no telephone services. Clients must travel to Mbinga Township, or the nearest village with telephone service, to access savings balances and process loans. Clients often have to make such trips more than once, but are willing to do so despite the transaction costs because they value the perceived security of Mbinga accounts and the suitability of the bank’s services to their financial needs.

The inability of MCB’s clients to diversify economically is also a challenge for the bank’s delivery of financial services. Most agricultural clients are dependent on single crops. For years, coffee has been the mainstay of Mbinga’s economy. The global price fluctuations have had disastrous consequences on local incomes.

MCB’s future is tied to the community it serves. By maintaining its close dialogue with its clients and responding to their needs, it believes it will be able to expand its business in Mbinga, and capture and maintain quality customers. MBC’s staff maintains close contact with their customers, by telephone or by travelling to meet them.

The ‘community’ flavour of the bank enables it to gain and maintain customers even in areas served by a branch of the National Microfinance Bank – the only national bank significantly represented in the region.

Mark Napier was until March 2009 the chief executive officer of FinMark Trust, a non-profit South African trust dedicated to making financial markets work for the poor in Africa. He now works as an independent consultant. This article is an extract from Napier’s book Real Money, New Frontiers, published by Juta and Company Ltd and sponsored by FinMark Trust, the Department for International Development, and the Development Bank of Southern Africa.