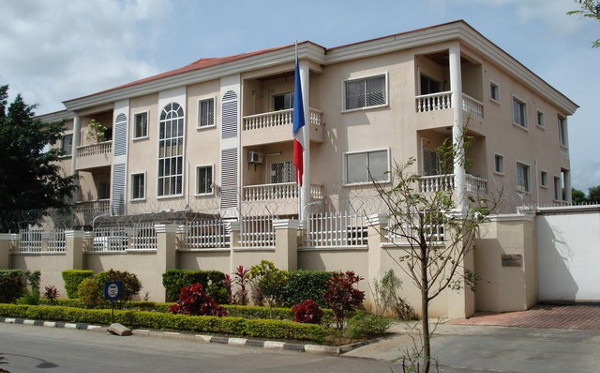 The French embassy in Abuja, Nigeria

In May, Emmanuel Macron won decisively against Marine Le Pen to become the 25th French President, and the youngest head of state since Napoleon Bonaparte. Against Le Pen’s anti-immigration and anti-European Union campaign rhetoric, Africa may be relieved that Macron is now in power.

However, Macron has said that there is a need for an ‘aggiornamento’ (update) of the relationship between France and Africa.

Emmanuel Macron is from an elite French institution ‘École Nationale d’Administration’ (ENA) that aims to train future leaders in public administration. Including Macron and the current Prime Minister Édouard Philippe, the alma mater of ENA has three former presidents and seven former prime ministers of France. Macron did his internship under ENA with the French Embassy in Lagos, Nigeria for six months and was from the ENA class of 2002-04 that was named after the first President of Senegal, Léopold Sédar Senghor.

Although he was not directly involved with Africa during his term as economic minister under former President François Hollande, he saw how the latter conducted his African foreign policy and has developed his own personal links with various African leaders. Moreover, during the presidential campaigning, he expressed some of his thoughts and plans about Africa. For instance, he said that his main focus is going to be on security, training and education, as well as the African small and medium enterprises (SMEs) that will create jobs.

However, Africa should not be under the illusion that Macron is going to be a president with Africa at heart. First and foremost, he has been mandated by the French electorate to look after France. Macron has also stated clearly that he will look closely after the French and all French interests, wherever they are. Therefore, he will definitely make sure that French companies and the interests of France will be safeguarded in Africa and not the other way round.

The influence of France in Africa

The economic interests of France in Africa run wide and deep. According to Eurostat, France has trading relationships with all African countries. In 2016, it traded a combined amount of about €45.6bn (US$53.1bn). The top trade partners are the Maghreb countries, namely Morocco, Algeria and Tunisia. They represent €23.5bn ($27.4bn) or 51.5% of the French trade with Africa. For 20 African countries, France traded at least €300m ($349m) with each of them and they represent a combined 93% of its total African trade.

Some companies like Airbus are increasing their engagement with Africa. The biggest pan-African airliner, Ethiopian Airlines, was the first to fly the latest Airbus A350. Its initial order was 14 A350s, and it is placing another new order of 10 more of these airplanes this year. For RwandAir, Airbus has just delivered two brand new A330s. Moreover, by the end of this year, it will start delivering six of the A350s to Air Mauritius. Airbus aims to sell many more of its aircrafts to Africa in the future. This shows that Africa is providing very lucrative opportunities to French companies.

In terms of investment, according to statistics from the Organisation for Economic Cooperation and Development (OECD), the total foreign direct investment (FDI) stock of France in Africa was about $54bn in 2015. The West African region, including many within the francophone region, is the major destination of these investments, representing about 49% of the total French FDI. The Maghreb and North African countries are the other major destinations for the French investments, with about $17.7bn invested.

Some of the major automotive companies are targeting and investing massively in African countries. For instance, while French car manufacturer Renault is second after Toyota in sub-Saharan Africa with around 8.5% market share, it is the leader in the Maghreb countries, capturing 39% in Morocco, 36% in Algeria and 15% in Tunisia. It has plans to capture 20% of the total African market in the next decade.

To do so, Renault is investing massively with its €600m ($699m) factory in Tangier, Morocco, that is producing 400,000 cars annually for the export and local markets. Nearly €1bn ($1.2bn) more will be invested with Renault bringing its other equipment manufacturing partners to invest as well. The other French car maker, PSA Peugeot Citroën, is also investing nearly €600m ($699m) for an assembly plant in Kenitra, Morocco. Similarly for Algeria, both companies are investing in their own assembly plant aimed at producing vehicles for the local market.

All major companies within the French stock index CAC 40 have some direct or indirect links with Africa. Hence, it will not be surprising to see Macron not only safeguarding all these interests, but also leading a wider and deeper expansion into Africa to support the geopolitical, economic and commercial interests of France.

According to World Bank statistics, the French economy has been struggling. France grew barely by 0.2% in 2012. Over the last five years, compared to Africa’s average of 3.88%, France averaged a low of 0.8% economic growth. In spite of the fact that the economic outlook of France improved over the past couple of years, the new President Emmanuel Macron is facing major challenges in reforming the French economy. Although a major part of his programme is mainly focused on France and its place in Europe and the world, he has also identified that France should strengthen its relationship with its major partners in the Maghreb region, as well as with the greater Africa.

With the declining influence of France in Africa, former President François Hollande drastically intensified its engagement. He was probably the only leader in the developed world who has visited Africa repeatedly in various occasions like the Africa-France Summit, Francophonie Summit and many others.

It is likely that Macron will continue with what Hollande has started and further enhance these activities. In his campaign programme, he aimed to increase support for teaching the French language and culture, as well as promote more Francophonie activities within Africa. According to him, it is through these activities that France will maintain and build its influence.

However, Macron has also mentioned that there will be an aggiornamento in the partnership between France and Africa. But for now, it is not clear whether this aggiornamento will be politically or economically driven. What is for sure, is that he aims to unleash globally the economic and political potential of France and that Africa may be part of his plans to push France “En Marche!” (On the Move).

It is evident that Macron will mainly focus on France’s interests. Hence, for Africa, it must also make sure that it is not at the losing end. The development and rise of Africa should go beyond the self-fulling prophecy of the late Gabon President, Omar Bongo, when he said “L’Afrique sans la France, c’est une voiture sans chauffeur. La France sans l’Afrique, c’est une voiture sans carburant” (Africa without France is like a car without driver. France without Africa is a car without petrol). If Africa does not want to continue living in the legacy of FrançAfrique, it needs to break away from its dependency syndrome and be the driver of its own future.

Richard Li is a Singapore-based Partner with Steel Advisory Partners, a management consulting firm that serve clients across industries. Having spent his working career in strategy consulting, he worked with various global clients and covers themes such as Corporate Strategy, Transformation, Digital Innovation and Risk Management. He can be contacted via the Steel Advisory Partners site. This article was specifically written for the NTU-SBF Centre for African Studies.