M-PESA has won the Mobile Money for the Unbanked Award at this year’s Global Mobile Awards, which was held last week in Barcelona. 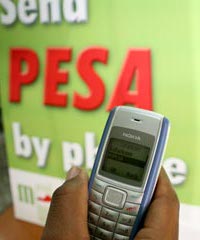 The category topped by M-PESA recognises innovative, sustainable, pioneering mobile money services around the world that bring low-cost financial services, through mobile, within the reach of low income groups. The award recognises the mobile money service that has had the most significant impact on unbanked customers in developing markets over the last year.

The award was jointly received by five operators – Vodafone Group, Safaricom, Vodacom, Vodafone Essar Limited and Roshan Ltd – that offer the M-PESA service in various parts of the globe. The service is available in a number of countries, including Kenya, Tanzania, South Africa, Egypt, Afghanistan and Fiji.

M-PESA was first launched in Kenya on the Safaricom network just over three years ago.

Safaricom CEO Bob Collymore exalted in the win and said it was a validation of ongoing work to expand the M-PESA service in line with meeting the needs of the Kenyan customer.

In an exclusive interview with How we made it in Africa last year, Susie Lonie, who was recruited to develop and manage the project on the ground in Kenya from pilot to commercial operation, said: “From very early in the project I felt certain that we were onto something pretty big with M-PESA. However, I would never have predicted anything like the growth we experienced. I remember a month after the Kenyan launch the Safaricom CEO called us to his office and said he wanted us to triple our year one target. We thought he was joking but in fact we achieved this new target in the first eight months.”

Lonie expects to see an increasing level of integration between products such as M-PESA and the more traditional financial services infrastructure. “Already in Kenya, M-PESA customers can have a savings account held in a bank but only access it via M-PESA, and never set foot in a banking hall. In Tanzania, customers have been able to top up their prepaid electricity through M-PESA without needing to travel to a licensed vendor of electricity vouchers for nearly two years. This kind of integration, where M-PESA is an access channel to many kinds of payment and banking services, will continue to grow. One day in the not too distant future products like M-PESA will be accepted by the banking community as just as obvious an extension of their portfolio as internet payments have become,” she said.