Zambia’s tallest building, the burnt-out Society House tower in Lusaka, is to be redeveloped at a cost of US$100 million. 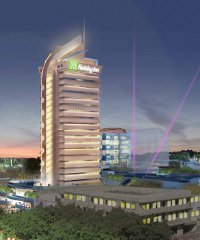 An artist's impression of the new building.

The current 20-storey Society House building was constructed during Zambia’s golden decade of the 1970s when the copper industry was booming.

“Zambia was prosperous, modern and building state-of-the-art skyscrapers. Zambia had television while South Africa was still listening to the radio,” said Robert Silke, a partner at Louis Karol Architectural, designers of the new building.

The collapse of the copper price in the late 1970s, however, marked an end to Zambia’s fortunes and development in Lusaka slowed-down dramatically. By the late 1990s, a fire in the building left it uninhabitable and 15 years later the burnt-out tower still looms over the city’s skyline.

Kelly Kalumba, also a partner at South Africa-based Louis Karol, said in a company statement that the previous decade saw a return of prosperity to Zambia. “Foreign investment has resumed and the copper price is higher than even its peak in the 1970s,” said Kalumba. 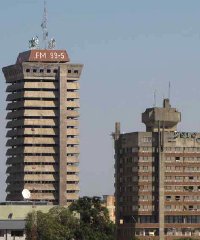 “Today marks the beginning of the rise of Society House from the ashes of that terrible inferno . . . The face of Lusaka is surely changing for the better and my dream is that this change does not stop within the boundaries of Lusaka but spills over to the other towns and cities,” commented Zambian President Rupiah Banda at a groundbreaking ceremony at the end of May.

Louis Karol CEO, Eitan Karol, said that most of the new investments in Zambia are, however, restricted to suburban and peripheral areas. “Lusaka’s skyline has yet to show evidence of the new prosperity. The redevelopment of Society House will be a generous, very visible public gesture that isn’t restricted to private malls and office parks in the suburbs,” he noted.

The redevelopment is a joint venture between Zambia’s National Pension Scheme Authority (NAPSA) and the Zambia National Building Society (ZNBS), both government-owned organisations. A consortium of Zambian and South African construction firms is responsible for design and construction work.

South African property and construction companies are involved in numerous projects in Zambia, including Liberty Life’s mixed-use Levy Junction development and the Manda Hill shopping centre. Many South African retailers also have a presence in the country.