Africa has seen how innovations in technology can bring solutions to many of its problems, such as mobile payments platform M-Pesa leapfrogging traditional banking infrastructure which is vastly lacking on the continent. Tech entrepreneurs have the power to bring positive change to Africa. 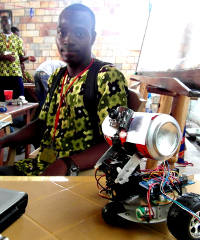 The Anzisha Prize, which recognises and celebrates African entrepreneurs between the ages of 15 and 22 who are using business to solve problems in their communities, is currently making its way through 339 applications to find this year’s top 12.

While the reviewers are still evaluating the entries, Chi Achebe, programme manager for The Anzisha Prize, says competition is stiff this year with numerous outstanding applications.

Over the last few weeks How we made it in Africa has been profiling some of these applicants, and this week focuses on young tech entrepreneurs who are doing some incredible things on the continent.

IMPORTANT NOTE: Finalists for The Anzisha Prize have not been announced. The entrepreneurs profiled below have been selected randomly and are not necessarily winners.

Togolese Sam Kodo created his first robot at the age of eight, and by 19 he caught the attention of the international media for his robots, which can now interact with humans, recognise faces and objects, speak, execute orders and even play football.

A few years ago Kodo created his first smartphone and today has his own technology company, Infinite Loop, which produces low-cost computers. The miniature computers can fit into a pocket and plug into TVs or touchscreens to turn it into an internet enabled desktop PC. They are sold for US$76 but costs around half the amount to produce, says Kodo.

“In our country, many students do not have enough to afford the IT tools for their school work; hence the idea came to me to help with this project.”

Using the cash prize he won at a national competition for young entrepreneurs last year, Kodo has been able to buy the materials to make his computers, employ six people and rent a work space. Since February, he has sold 45 computers in Togo and his company earns revenues of roughly $1,048 per month.

“The objective that I want for my life: to inspire other young Africans like me, for us to develop our continent.”

Chukwuwezam Obanor holds a degree in electrical engineering from the University of Lagos in Nigeria and is one of two co-founders of Prepclass.com.ng. The e-learning platform was launched at the end of last year and provides a database of past tests with detailed answers, class notes and other relevant content to help prepare prospective university students for exams. The tech startup has partnered with the Joint Admissions and Matriculation Board (JAMB) in Nigeria.

“In general, Prepclass addresses challenges such as limited access to relevant content, poor distribution and high cost of study materials resulting in consistently low pass rates,” explains Obanor. “These challenges are pervasive across all local exams written in Nigeria.”

The company plans to make revenue off an advertising model and by charging users a fee to access premium material. According to Obanor, Prepclass already has over 1,000 users and 150 paid users, generating $120 in revenue per month.

“Ultimately, we believe that education should be democratised and all the relevant content should be made readily available to students,” adds Obanor.

Tom Nyakambi Nickson is a mobile and web app developer who is currently studying medicine in Kenya. In April 2013 he started mHealth Solutions Centre, an ICT startup that develops apps to address acute problems in the Kenyan health system, with a main focus on maternal child health and cancer detection and prevention.

“A woman has a 1 in 16 chance of dying during childbirth in sub-Saharan Africa and developing regions of Asia, compared to 1 in 4,000 in the developed nations,” notes Nickson. “Obstructed labour remains an important cause of not only maternal death but also short-term and long-term disability. It has a particular impact in communities in which… availability of functioning relevant health services is sparse.”

Although the startup is still in its fundraising stage, Nickson is working with a pharmacist and they piloted a version of the app in August last year.

“Sustainability of this innovative technology will be attained through partnering with healthcare providers, NGOs and governmental agencies in developing countries. The high penetration of mobile and web in developing regions will facilitate widespread uptake at the community level, which will dramatically reduce the maternal and infant mortality rates in these settings,” Nickson explains.