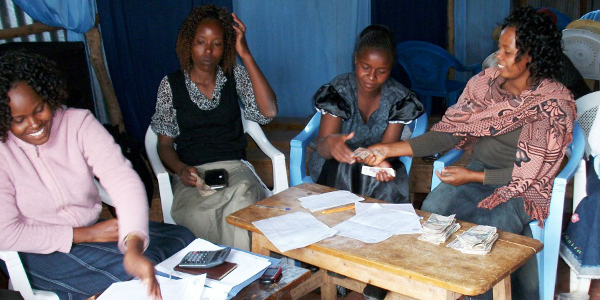 ‘Table banking’ may not be a complex financial concept, but it is making a difference in the lives of thousands of women and their families in rural Kenya.

It’s a simple idea whereby members gather each month and literally put their money on the table, which then becomes immediately available to members as loans. The practice eliminates bank fees, waiting periods for loan approval and many other obstacles faced by women in Africa who need loans but lack collateral. The loans are used to start revenue-generating projects.

Joyful Women Organisation (JoyWo) is one of the most successful table banking groups in Kenya, with a membership of more than 11,500 women’s groups, each group having 15 to 35 members on average. Started by Rachel Ruto, wife of Kenya’s deputy president William Ruto, in 2009, JoyWo had only 80 members, mainly from Ruto’s Uasin Gishu County, about 270km northwest of the capital, Nairobi. The group started with a revolving fund of about US$800.

In six years it has expanded to 44 of the 47 counties in Kenya. Its revolving fund has grown to $16m from members’ contributions, loan repayments, grants and donations from fund-raising.Today, JoyWo is giving loans to support such projects as greenhouse farming, poultry, horticulture, cattle-rearing and overhead irrigation.

In the past five years the average annual income of more than 740 such women’s organisations worldwide was a mere $20,000, according to the Association for Women’s Rights in Development, but JoyWo has set its sights even higher.

“We are committed to helping women to rise up because I know a woman is a full circle. Within her is the power to create, nurture and transform,” Ruto told Africa Renewal.

Irene Chepkoech Tuwei, an unemployed single mother of two, disabled from an early bout of polio and with a past drinking problem, is one of the beneficiaries of JoyWo. According to JoyWo, she joined the organisation in late 2010 with an initial contribution of just $2 from her savings. She took a loan of $150, bought two pigs and opened a grocery kiosk. In 2011 she took a $700 loan to improve her small business and buy chickens and a dairy cow, which boosted her income. Last year she took a $3,000 loan and bought a Ferguson tractor that she leases to farmers at $150 for each acre cultivated. In a good month, she makes about $4,500. She has considerably increased her shares, making her one of JoyWo’s top savers. She has also bought a car and a motorbike to use in running her business, and is now in the process of opening a petrol station.

“Table banking has transformed my life for the better… it has given me a plate from which I will be eating. I want to be one of the shining examples of successful persons living with disability in the country,” said Irene, who has shared her story at several JoyWo table banking launches in other counties.

The success of members like Irene and the influence of JoyWo have been such that this year’s Committee on the Status of Women conference, which is convened annually by the United Nations, invited Ruto to New York in March to speak about JoyWo’s innovative approach in empowering women through table banking. She shared the groups’ successes and challenges, and what other countries could learn from her experience. Ruto was honoured by the Centre for Women in Leadership with an Honorary Fellowship Award from Binary University in Malaysia for her outstanding work with women. She has also received the Most Distinguished Alumnus Award from her alma mater – Kenyatta University – for her work with women.

To make running the JoyWo in rural counties easier, members form smaller groups of about 15 to 35 members at the village level. They contribute money based on the ability of each member and the group’s constitution. Each group has a minimum and maximum amount each member can contribute, to ensure that all the women are on the same economic level. Each member is given a passbook to record transactions.

From the money placed on the table, a member can borrow up to twice her contribution, referred to as “shares”, for short-term loans to be repaid within three months. A long-term loan, which can be up to three times a member’s shares, has a repayment period of six to 36 months. Since loans are processed at the smaller-group level, and because the members meet monthly, it takes a month to process a long-term loan, while short-term loans are given on the spot.

To the smaller groups, JoyWo gives interest-free loans, and collateral is mostly in the form of guarantors. The small groups in turn who re-lend the money, charge their members 10% interest for short-term loans and 12% for long-term loans. The interest forms part of the revolving fund and is paid back to members as dividends at the end of the year. In 2014, for instance, $1.5m was paid out to the women as dividends.

As a result of its popularity and its impact, big organisations have formed partnerships with JoyWo, often through donations or training. These organisations include UN Women, the Ford Foundation, Hivos, Kenya Commercial Bank, Kenya Institute of Business Training, Unilever and Intel, among many others.

To promote table banking countrywide and make it more effective, Ruto realised that training should go hand-in-hand with borrowing. Entrepreneurial skills, for example, could help increase profits, so she introduced different types of business training. The courses included training in agri-preneurship to help turn peasant and small-scale farmers into entrepreneurs, since more than 90% of JoyWo members live in rural areas in a country where three-quarters of the population depends on agriculture for sustenance.

JoyWo has also created market access programmes under which its special-purpose vehicles are available to members so they can market their produce collectively. It has even gone further and now has a housing project that allows members to build and own affordable homes.

Like any other organisation of this size that is rapidly expanding, JoyWo faces some challenges, such as loan defaults, which currently stand at a rate of 2%.

“This is why we always insist that members should know and be able to vouch for one another,” said Ruto.

JoyWo encourages membership from diversified fields across a wide socioeconomic spectrum, she added, especially in remote areas where non-reading members have to rely on their more literate colleagues. “We believe in empowering women through education, so we have started an educational initiative known as Jawabu to lift the literacy levels amongst our members.”

JoyWo is an example of how women are mobilising at the community level against years of discrimination and the structural systems that disadvantage them, particularly in terms of access to financial services.

Poverty and gender inequality go hand-in-hand. UN secretary-general Ban Ki-moon said the world will never realise 100% of its goals if 50% of its people (women) cannot realise their full potential. “To be truly transformative, the post-2015 development agenda must prioritise gender equality and women’s empowerment,” he said in his message marking this year’s International Women’s Day.

As the Third International Conference on Financing for Development gets under way in Ethiopia, gender rights advocates are hoping that funding for gender equality and the empowerment of women will be given due priority. In the post-2015 development agenda, funding for gender goals will be critical, given that the major obstacle to the fulfilment of Millennium Development Goals on gender was lack of sufficient funds.

In the meantime, the women at JoyWo continue with their expansion plans. Instead of complaining about lack of funding, the organisation plans to use their contributions to reach a million women in all the 47 counties in Kenya by 2017, before expanding throughout the rest of the East African region. It also plans to increase its long-term loan portfolio from the current $1.2m to $12m by 2016.