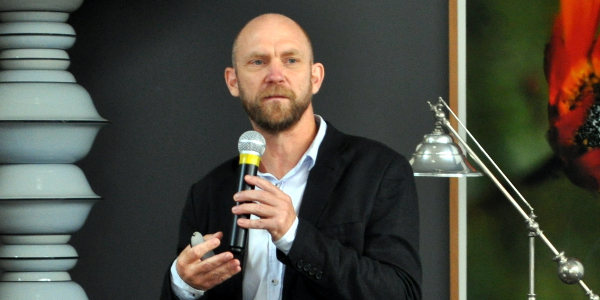 Stuart Forrest speaking at the launch of the 2017 Entrepreneur of the Year award in Cape Town.

Triggerfish Animation Studios is a South African film and entertainment animation company which produced the award-winning feature films Adventures in Zambezia and Khumba. It has also recently created the animation for Roald Dahl’s Revolting Rhymes TV series, which premiered on BBC at the end of last year. Triggerfish is now working on its next film, Seal Team, which is set off the coast of Cape Town. This animation follows the story of a seal and a team of misfits who decide to fight back against the sharks who dominate the waters.

But the company’s journey to success has been far from easy and Stuart Forrest, the man behind the business, has seen Triggerfish through many challenging times – including liquidation. At yesterday’s launch of the 2017 Sanlam and Business Partners Entrepreneur of the Year award in Cape Town, he shared this experience with an audience.

Starting from the bottom

Forrest is not the original owner of Triggerfish, and actually managed to buy out one of the partners following years of working for the company. He joined the business after studying fine art at university, and was hired to assist with producing animation for Takalani Sesame, the South African version of the children’s TV show, Sesame Street. Back then Triggerfish was a small operation that mostly did commercials.

He spent a number of years working for the business before one of the owners decided to leave and Forrest, who didn’t have enough funds at the time to purchase his stake alone, managed to bring in his own partner to help buy out the previous owner. However, Forrest quickly discovered that the business was struggling to find work.

“Advertising agencies wanted nothing to do with us because they were looking for something edgy and we were doing all this playful stuff for kids. And [the income from] Sesame Street wasn’t enough.”

After a year of no new work, Forrest was forced to liquidate the company. He and his partner sold almost everything, and decided to start over – keeping the original company name Triggerfish. They were still doing work for Takalani Sesame, but this time from Forrest’s kitchen.

“It was a really tough time,” he recalled. “I was hugely in debt, young and newly married, and I had just no prospects.”

To busy himself, he decided to start an organisation for all industry professionals, called Animation SA. It was the first of its kind for this budding industry in South Africa and today acts as a network and database for all animation professionals.

From failure to success

Forrest was then hired by another studio to help direct an animated movie. However, he admits he wasn’t the best person for the job.

“The whole project ended up quite badly, and I was fired along with the head of production, and we left it in disarray.”

However, Forrest managed to convince the head of production to join his team, and they acquired the rights to turn the project into a feature film, which would later become Adventures in Zambezia. Triggerfish also managed to bring in another partner – a writer who had just won a national award for the screenplay of Khumba – and Forrest quickly found himself with two promising scripts for full-length films.

But getting the funding to produce them was a different story.

“If you are from ‘Africa’, it’s incredibly tough to go out to Los Angeles to ask for US$5-6m to make a movie. We had never done anything like it before… It was very hard to get anyone to buy in.”

After about three years, Triggerfish managed to find an agent in Beverley Hills who used the animation they had done so far to secure pre-sales for Adventures in Zambezia. This helped bring in a gap funder and, numerous calls later, Triggerfish finally had enough capital.

“We got the money, after literally years of poverty and always borrowing to pay salaries to get through the month, and phoning the bank to ask for another delay on the bond payment.”

Forrest said when he opened Triggerfish’s bank account and saw around R40m (now equivalent to about $3m) available for his team to start production with, he was so excited that he skipped through a doorway and managed to cut his head open.“So by the time I told the other guys that we had the money, there was blood falling down my head,” he recalled.

Within a few weeks, Triggerfish grew from eight to 80 people, and this was partly because Forrest had managed to grow a name for himself as the founder of Animation SA. By the time his company was able to hire, he just shared the news over the network and received around 600 applications within the first day.

Once completed, both films sold quickly. Adventures in Zambezia was released in 2012 and Khumba in 2013. They have since been dubbed into 27 languages, are available in 150 countries and have collectively raked in $76m in gross revenues so far. According to Forrest, they sold nine million cinema tickets globally and Adventures in Zambezia broke box office records for a South African-owned film since the 1980 feature, The God’s Must be Crazy.

Be able to adapt

Despite its success, Triggerfish has still had some challenging times between production deals – trying to balance a large workforce during periods of little work. However, Forrest said he has learned some valuable lessons along the way.

These include seeking out advice from other professionals within the industry, and not being afraid to change the company’s business model if something isn’t working. For example, Forrest said for a long time he tried to focus on producing animated commercials – but he had very little passion for commercials and therefore struggled to connect with advertising agencies. It wasn’t until he finally decided to change the direction of the company that things finally began to fall into place.

“Be able to let things go, and listen to those around you and your customer. Find out what it is that people actually want,” he advises.