Amazon’s Kindle devices are by far the world’s most popular e-readers, with roughly 60% of global market share, according to some estimates. In second place is Barnes & Noble’s Nook with a 25% share of e-readers, followed by Kobo – based in Canada, but owned by Japan’s Rakuten – with about 10%. 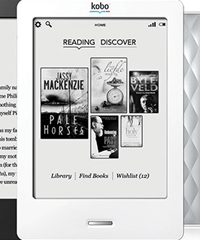 The Kobo Touch e-reader is now for sale in South Africa.

Kobo Inc. is, however, looking at conquering the South African market. About a month ago the company entered South Africa with its Kobo Touch e-reader through an exclusive partnership with supermarket chain Pick n Pay. While the retailer has not made available any sales figures, it has high hopes for the Kobo Touch.

“The reason that we partnered with Kobo Inc. as a company is that we are always looking, as a business, at providing our customers with things that they need and they want,” said Zanele Masuku, Pick n Pay’s general manager for brand. “So we are always scouting around to understand what the market is looking for and obviously – with the growth of e-readers – this was an opportunity for us to bring an e-reader into the market which is actually a brilliant tool … and also it’s at a very good cost.”

The Kobo Touch – with Wi-Fi, but no 3G – is sold for 995 South African rands (just over 110 US dollars) at select Pick n Pay stores and through its website. An entry level Kindle would set you back at least 250 rands more than the Kobo.

Kobo predicts that it will capture 50% of the South African e-reader market within the next year. While this is an ambitious target, Kobo’s strength lies not only in the attractive price of its device, but also its range of local content, including over 1,000 Afrikaans language e-books. In total the Kobo bookstore offers three million books with a third of them being available for free.

In its January 2012 issue, The Kobo Touch was named Wired magazine’s editor’s pick for best e-reader. Wired called the Kobo a “surprise winner”.

The Kobo Touch weighs 185g, has adjustable font sizes and a battery life of up to one month. It holds up to 1,000 e-books.

Pick n Pay and Kobo have signed a six month exclusive deal for the e-reader, which will also allow the retailer to earn a percentage on all e-books bought through Kobo devices purchased in Pick n Pay’s stores.

The e-book market in South Africa is still in its infancy and according to the Publisher’s Association of South Africa in 2011 accounted for less than 1.5% of book sales.

Michael Serbinis, CEO of Kobo, said the company was excited to enter the African continent for the first time with a partnership with Pick n Pay. “Together, we hope to transform the digital publishing market by making more e-books available to more people throughout South Africa,” added Serbinis.

While Pick n Pay has a presence across a number of other African countries, Masuku said the retailer does not yet have any plans to introduce the Kobo Touch into its stores outside of South Africa. “I think that we have got to make sure that our formula absolutely works where we are before we take it and [introduce it in the rest of Africa]. You know it’s very hard to sell anything in Africa. You have got foreign exchange issues, etc,” explained Masuku. “So you have to be very careful on how you go out into that market place.”

According to tech research company Gartner, there was 11 million e-readers being used globally in 2011. This number is expected to increase by 48% to 16.3 million devices by the end of this year.