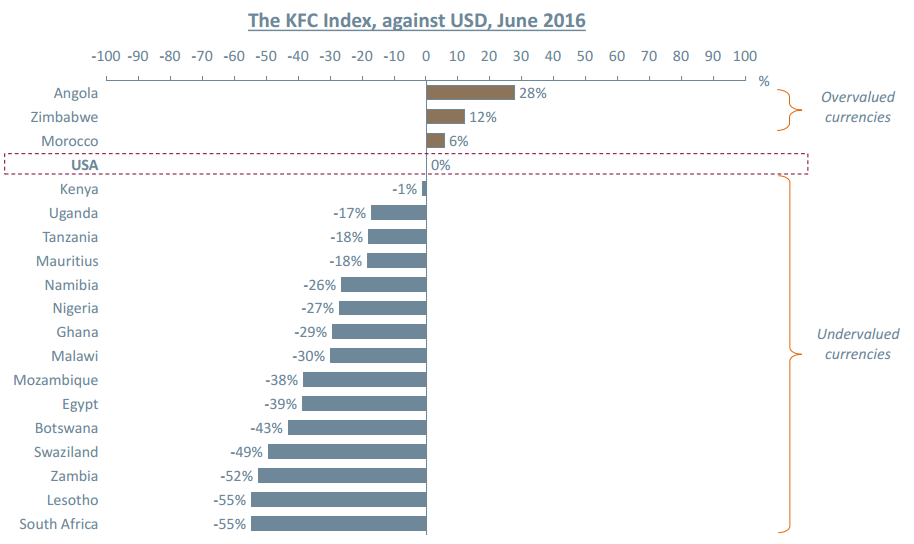 By analysing the prices of the Original Chicken Bucket from fast-food chain KFC, the index provides insight into African currency valuations and consumer purchasing ability relative to the US, and selected European countries. KFC has a presence in 18 African countries.

The second quarter of 2016 saw average costs of the Original Chicken Bucket vary greatly from country to country, indicating a disparity in real versus implied currency exchange rates.

The highest prices in comparison to US-based prices are found in both Angola and Morocco, whose currencies are estimated to be overvalued by +28% and +6%, respectively, a decrease from +72% in Angola in the first quarter of 2016. On the other hand, the lowest prices are found in the southern African countries of Lesotho and South Africa, whose currencies are both undervalued by 55%.

The index further reveals that the Nigerian naira has moved from being overvalued by +8% in the first quarter to being undervalued by -27% in the second quarter, with its currency devaluating by 42% over the same period. The Mozambican metical suffered a decrease of its value, plunging to -38% in the second quarter, as opposed to an overvaluation of 4% in the first quarter.

Moreover, the report shows that in the past three months, currencies have further depreciated on the black market in Egypt and Angola by 33% and 32%, respectively, creating an index of -64% for Angola compared to a +28% using official rates.

The index is inspired by The Economist’s Big Mac Index.