US-based restaurant group Yum! Brands, owner of brands such as KFC, Pizza Hut and Taco Bell, says it doesn’t expect its African expansion strategy to deliver a meaningful contribution to global profits until 2020. 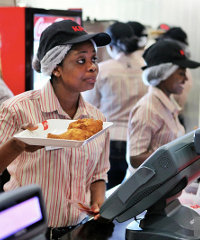 Inside the KFC restaurant in Accra, Ghana.

“In a place like Africa . . . we are just getting started . . . We are not relying on that business to have a significant increase in our profitability . . . for the rest of this decade,” said Richard Carucci, Yum!’s chief financial officer, yesterday during the company’s annual investor update meeting in New York.

In Africa, Yum! mainly focuses on the KFC brand as “chicken on the bone is the primary protein of choice”.

KFC first opened in 1971 in South Africa, and it is currently well established in the country with over 600 outlets. Yum! has, however, embarked on a strategy to grow the brand in the rest of the continent. “In the last year we have gone into five new countries in Africa,” said David Novak, chairman and CEO of Yum!.

At the end of last year, Keith Warren, Yum!’s general manager for Africa, said that the company plans to have 1,000 restaurants in the continent (excluding South Africa) by 2020.

KFC has recently also opened in Ghana, Kenya and Zambia. Last month, Warren told CNBC Africa that KFC will “very shortly” launch in Angola, and that outlets in Malawi, Tanzania, Uganda, Democratic Republic of Congo (DRC) and Zimbabwe are to follow.